I mentioned, briefly, back on 11th September, that Wink had had a very near miss on the motorway while driving to visit us.  I took a photo of her car the next day, but never got round to posting it here.  However, reading Christopher’s account of the horrible skid they had on a busy, icy road (black ice, Blue Witch, he wasn’t driving too fast for the conditions as far as he knew) reminded me.

Just to recap – Wink was driving along the M11 when she glanced in her rear-view mirror and saw a car overtaking another and going out of control.  She braked, not knowing what was likely to happen.  The car shot alongside her, hit the central crash barrier and shot across her bows almost at right angles to her car.  On the hard shoulder, it righted itself again and was brought to a stop some way along.

Piecing it together afterwards, it appeared that the driver of the car being overtaken had been intending to pull out himself.  He looked in his mirror, it seemed okay, so he signalled and started to move, looked again, and a car was coming along very fast in the overtaking lane.  He stayed where he was, but the woman driving the overtaking car may have thought he was pulling out, swerved,  and was going so fast that she couldn’t control the car.

This, they discussed while waiting for the police to arrive.  They couldn’t ask the woman, who was sitting in her driving seat and didn’t get out.

Wink was surprisingly matter-of-fact about the whole thing.  It hadn’t happened, it nearly had but it didn’t.  So no need to get worked up.  We offered to come and fetch her, of course the motorway was closed but we could have met at the next service area and I bring her car back while the Sage drove Wink.  But she decided against it.  She did stop and have lunch, but then carried on.

Once she was here, she realised she’d lost her mobile.  She’d had it at the service area, but not used it since. We tried ringing it, but no reply.  However, not long afterwards, I had a phone call.  Wink had stopped in the next town to here, to buy me a pot plant.  The phone had dropped out of her pocket into a flower pot and another woman had just found it.  Since she didn’t want to wait, she said she’d leave it at the supermarket.  She phoned me because she checked the last caller.

So, two non-events, in one sense.  But it was a near miss.  Check out the picture. 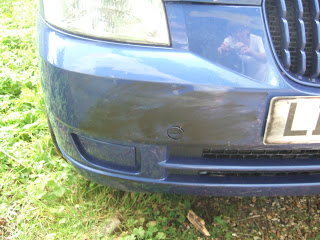 The car was that close.  Wink braked just enough.