I’d just said to the Sage that I was going to get changed, ready to leave at 6 o’clock to meet my friends for dinner, when the phone rang.  It was Al. 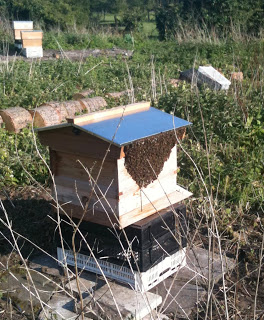 He’d been out to check the bees and found that a swarm was clinging on to one of the hives.

He knew they were about to swarm so had split them already – an artificial swarm, that is, you bamboozle them into believing that they have swarmed and, among the ones left behind (the queen and half the bees take half the food with them to set up a new home, leaving queen larvae and enough workers and food to keep the colony going) the new queen will hatch, fly, mate and return to the hive to spend the rest of her life laying eggs. Evidently, they had not been deceived.

By the way, Blue Witch, I’m sure this is only vaguely connected to the actual process, but bear in mind I don’t really know what I’m talking about. I’m not the beekeeper of the family.

He was wanting the Sage to babysit while he and Dilly went and dealt with the swarm, but he soon realised that it wasn’t going to be easy. The bees were all over the back of the hive with the queen somewhere in the middle and they were going to have to be coaxed into a new home. So he got in the car and drove off to Pob in Boringland to ask his advice. Pob lent him another hive and some tools to help and back he came.

In the meantime, of course, I’d been out to have a look but then had to leave for my evening out.

The other thing is that Al didn’t know which colony had swarmed. It was probably one of the established queens, but occasionally a left-behind colony will swarm – this is beyond even my vague understanding so I won’t try to explain – anyway, it could have been any one of the five, three of which are presently hatching out new queens (or two of them, anyway) and mustn’t be disturbed. And evening was drawing on and the swarm might take off at any time to find a refuge before the air chilled. If they flew before he returned, nothing could be done.

Anyway, I got back just before 10 o’clock and hurried indoors. “Did they catch the bees?” I demanded. They did, said the Sage, and have put them in the hive lent by Pob (who is a long established beekeeper with a hundred or a hundred and fifty – can’t remember – hives and provides all the honey for Al’s shop.

Mind you, it’s not that Al has gained any bees, just that he hopes not to have lost any. All he’s gained are some grey hairs and some more worry lines.