1 Played the clarinet.  It was fine.

2 Started to make the crumpets, discovered the recipe called for more milk than I had, so I whooshed off to Johnny’s farm for a litre of his splendid raw milk.  And his splendid raw-milk cheese too.

3 Made crumpets.  This took a while of course, as the first batter had to prove for an hour, then water, salt and baking powder were added and it had to rest again for twenty minutes.  Then I made the crumpets.  They’re enormous, much bigger than I expected.

4 I went for lunch with Roses and the friends she’d invited round for a DVD marathon.  I just had lunch.  I’ve promised to take through crumpets later if they’d like them, but that won’t be for a couple of hours yet.  I’m reckoning on one of the crumpets with the rest of the soup I made the other day for my supper.

5 And now I’m procrastinating.  I have some documents to go through and a meeting to prepare for.  But it’ll only take a couple of hours and I’ve the whole evening, so it doesn’t really matter.  Anyway, I’d rather blog.

Here is a picture of the finished crumpets.  The recipe said 10-12, but it also said to fill the rings just below the top.  I dunno.  Anyway, I trust they will taste good. 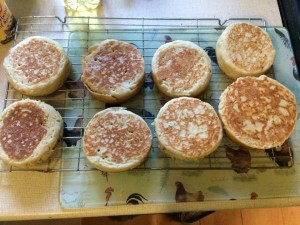