Today, I’m mostly focussing upon friends who have troubles of one sort and another – Christopher, Dandelion (who has too much on her mind to be reading this) and *the other one with problems*, you are in my most loving thoughts.  That there are three being thought of doesn’t lessen the strength of goodwill to each of you.

I also thought I’d show you one of the tidy corners of the kitchen.  And, that I consider this tidy – albeit cluttered – maybe shows how there’s no hope at all of ever clearing up.

This is where I keep tea and coffee, right by the kettle. You might be able to see that there’s a jamjar containing infusers, so that I can make one mug of tea at a time, using the tea of choice from one of the canisters. Some of them contain teabags, most leaves. The pink tin contains coffee beans, and the small plastic lidded box on the grinder is where I put the ground coffee – you can’t really grind enough for one cup, unless you have a machine to do it in.  The small cafetière was unwashed from last night.  The little tray is for receiving the teabag or contents of infuser.  At present, I have ten different teas on the go, eight to choose from and two more for those who prefer a more traditional cup.  That’s not counting tisanes, of course.
The table-top cooker is for when the Aga is turned off – not that it was, this last summer.  So I put things on it.  I hang up pots and pans so that they’re right there when I want them – life’s too short to fish things out of a cupboard.

And that explains why I don’t think it’s untidy.  They’re all there for a reason and they are all in frequent use.  Purposeful clutter isn’t necessarily untidy. 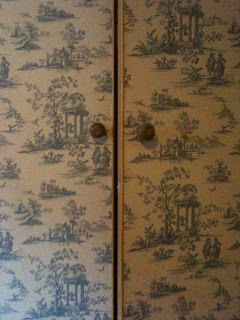 And this is a cupboard in the bathroom, built by the Sage to hide a truly hideous fireplace and wallpapered by me.  I wallpaper with care and do it well.  The bathroom walls, floor and ceiling all slant marvellously and it took ages to get everything right.  It is all exactly perpendicular and all the patterns match and there are no bubbles. It needs redoing actually, it’s getting grubby.  I still like it though, probably because it isn’t in the least bathroomy.

The little wooden knobs were made by the Sage, there are four of them.  When he’d made the cupboards, he nipped down to the churchyard with a saw, pruned a yew and turned the knobs on his lathe.  The whole thing was done in half an hour.

The doors do fit – one was slightly open.  I thought that closing it before taking the picture would be cheating a bit, so I left it.