I finally dealt with the draft probate application which I’d been eyeing cautiously all week and phoned the Dept of Work and Pensions in response to a text I’d been sent.  That was odd – it was certainly the right number and not a scam, but why they asked me to ring was because I’d apparently changed my address to one in Norwich.  I’ve never lived in Norwich and it can only have been a clerical error on their part.  I’ve no idea, of course, whose change of address hasn’t been put down, but there’s nothing to be done about that.  I’ve also notified someone else about Russell’s death and done various bits of admin.  I’ve helped the Head with a letter to a difficult parent.

I also used my new mixer for the first time and made bread.  Time was when I made all my own bread, but I haven’t done that for years.  Much of the reason is that I was unable to resist eating it straight out of the oven, which gave me awful indigestion.  I’m older and more self-disciplined now and cooled it first.  I’m quite keen to try my hand at sourdough, but the starter needs attention and I think I’ll work on ordinary breadmaking first.  Using the dough hook – I’d like to knead it by hand but that really isn’t going to happen at this stage – I ended up with this loaf. 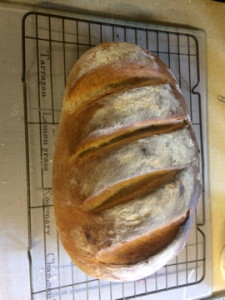 And, once it was cooled, I made a pot of tea and ate some with butter and strawberry jam.  Roses came to have some too. 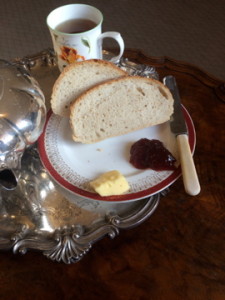 I felt quite pleased with myself.

5 comments on “Zed the breadwinner”