I have already shown you a picture of Weeza and Phil’s new house, but here it is again for those of you who missed it.  It’s a former Methodist church, situated in a North Norfolk village and is sufficiently far off the beaten track that I can get neither mobile phone nor internet coverage there. 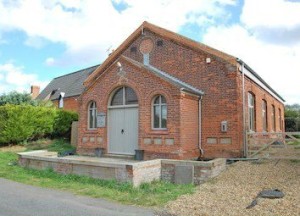 And here are some pictures of what we had to deal with.

The picture on the right is the floor of the oven, that on the left is the colour of the water after its first clean.  Second and third were as bad, it’ll take a couple more.  If I might give two words of advice to those who regularly cook pizzas on their oven shelf, they are Aluminium Foil.  Just put a square on the floor of the oven and change it every so often.  Simple as that.

We seem to be reading right to left again.  The house wasn’t filthy but it was generally grubby and not very welcoming.  We took over several bags of sawdust which we spread over the floor and then dampened and then swept up, which both prevented the dust from wafting about and added a pleasantly woody smell to the atmosphere.  And Weeza and I cracked on with the kitchen.  After an afternoon’s work, it all looked much better and we were quite cheered.  Russell and I are going to meet them again on Sunday and finish the job.

School started again today and I went in to the first assembly.  1,100 children sitting there quietly chatting until the Head spoke and then there was total silence.  The Head Boy and Head Girl and their deputies spoke too, I smirked when I was introduced but had chosen not to speak, I was wearing my new dress that I’d bought for the interviews that aren’t now happening, or not yet.  It’s navy with tiny white dots, fitted, with a peplum, just below knee length, sleeveless.  I was doubtful whether to buy it because of the sleevelessness combined with the peplum, it’s not easy to know what to wear on top of it, though I do have a summery white jacket that goes for now.  I was swayed by the size 8ness of it, I can’t deny, but I do like it and I’m pleased I bought it.