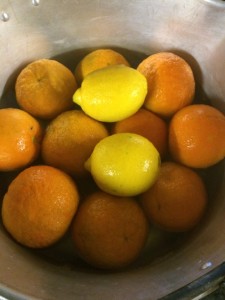 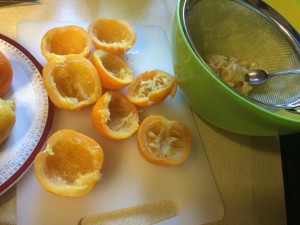 This is how I spent much of my morning.  I forgot to take a picture of the filled jars, but that came next, as you might expect.  I haven’t made marmalade for the last three years and have nearly finished the last batch – actually, two years ago I bought oranges but didn’t get around to using them, so they’re still somewhere in the freezer.  As you see, I gave up squeezing and slicing the raw fruit and now cook the oranges whole, which works really well.  I’ve always meant to do a side-by-side test for taste and easiness, but I’m not sure I’ll ever get round to it.  I know I prefer this on the whole and, as the uncut fruits cook quicker than the sliced peel, I’d have thought the taste would be fresher, if anything, but I doubt I’d detect any difference, in fact.  I’ve tried slicing the oranges by machine or in the food processor, but I found the first was a bit erratic and there was a fair bit of hand-finishing to do, and the second tended to make the marmalade cloudy, though the taste was fine.

I don’t actually use all that much marmalade, I just like making it.

When I was a child, it was my father who was the marmalade cook.  He enjoyed the preparation and the end result too (which my mother didn’t eat, so the work wasn’t worth it for her).  He used to go to no end of trouble, gently poaching slices of oranges to keep whole, so that they could be used to decorate the final product.  He also used to add whole blanched almonds and glacé cherries to the last few minutes of cooking, again to look attractive in the jar.  Do you remember when they gave away glasses at, I think, petrol stations?  He put marmalade in ours, when he ran out of jamjars.

My mother used to make pickles.  Red cabbage in particular – I’ve never made it myself, but I was remembering it when discussing with LT the vast amount of food that cooking a red cabbage makes.  Next time we want to cook it, I’ll pickle half.  I looked in the supermarket and the deli this week, but it wasn’t in either.  I haven’t looked up a recipe yet, but I seem to remember that it was salted first and then steeped in spiced vinegar.  I wonder if I’m right – I’ll find a recipe when the time comes, of course.

We did have a walnut tree, but never made pickled walnuts because we ate them all, but my friend Lynn’s mother did.  You have to pick them young, before the shells harden, then prick straight through the husk and then pickle them.

My mother also pickled onions, but I don’t remember her making chutney very often, probably because of the smell as it cooks.  We used to eat all these pickles on a Sunday evening, when she didn’t cook, unless it might be baked potatoes, but served the Sunday joint, cold, with salad.  It was the only meal of the week that was always eaten in the drawing room on our laps (on plates, darlings, I surely don’t have to make that clear?), served from a trolley.  I don’t think it really made less work in the preparation or clearing up, but that was the idea.

8 comments on “Z makes marmalade and dips into childhood”