The entertaining part was being taken out for lunch, which was lovely.  Indigo Roth came over in his smart new car and he started by being enormously helpful.  His unusual height was what I needed, to check the gauge on the gas tank – I wasn’t too surprised when he told me it was getting low and I’ll phone for a refill.  Then, we went to check on those hatching chicks and I was dismayed to find that they were still in their shells – still alive, but no progress had been made.  So Indigo and I carefully picked off shell, leaving the membrane, until they would be able to get out without more effort, and we tucked them back under mum.  They were hatched and nearly dry later, but still a bit wobbly, so I hope they’ll make it.  If they do survive, she will have nine chicks.  So for now, the chicks outnumber the adults and there’s a clutch to go.  However, the good thing is that I was able to herd the remaining bantam back into the run – she clearly hasn’t been sitting, so that’s excellent, and I’ve now got 14 in the run and 4 mothers, so all present and Reynard hasn’t got any.

We went for lunch at a nice local pub that always serves tasty food and I showed off by eating a proper pudding with custard, while Indigo merely had ice cream.  He and Eloise quite took to each other and he was impressed that she is doggishly obedient (some dogs, that is, I never did manage to train Ben) when called.  He tried to take her picture but she kept turning her head.  I managed this one, however – 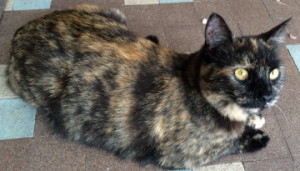 In the morning, I must leave early to get the cat trap.  I still feel pretty guilty about the prospect of catching them – I was able to pick up the tabby kitten this morning and they all mill trustingly round my feet – but I will be resolute.