I thought we were having a Dave moment when I went out into the porch and found the Sage valiantly sweeping out the flood waters with a broom. The garden wasn’t flooded, it was only that the downpour was more than could drain away at the time. With my priorities intact, I hastened back in for my camera – I thought I’d got it set to ‘movie’ so that you could see the Sage in action, but I hadn’t. But here’s what it looked like. 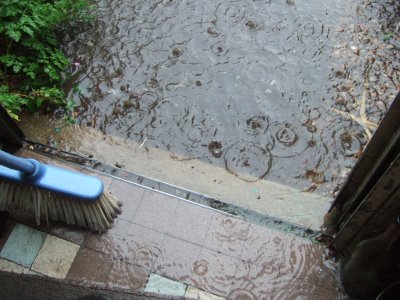 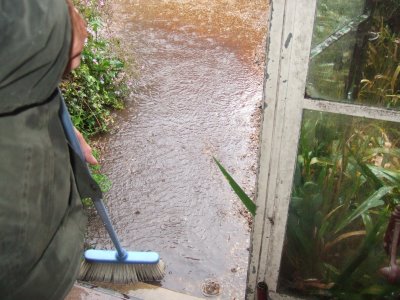 Yes, the porch has hideous metal-framed doors and windows and we long to replace them – you’d never be allowed to put them on a listed building now – but we are too frugal to take them down while they are still serviceable. However, we neglect them as much as possible and the inside metalwork has never been painted in the 23 years we’ve lived here.

It was a hot and sunny morning, so I hadn’t expected it to start raining when I was shopping in Yagnub. I gave up as it became heavier and ducked into the Post Office doorway to phone the Sage and ask him for a lift. I was wearing a longish, full skirt which isn’t that easy to manage on a bike at the best and I really didn’t fancy the final mile over open country. I thanked him a lot of times. I had two heavily full panniers on the bike and wasn’t wearing a jacket, just a tee shirt (and the aforementioned skirt of course) It was after I arrived home that the deluge started.

Dilly isn’t having the best of weeks – Pugsley is poorly (not with flu, we think it’s one of those nameless viruses), Squiffany had her first ever dose of nits and Dilly can’t wait for the end of term. She only has Thursday to go and then she can start to relax. She’s making plans for her time off over the next year – one thing she wants to do is to learn to cook. I mean, she can cook but she wants to gain confidence and knowledge. I can see some happy hours ahead browsing in cookery books for her to see what takes her fancy, then cooking sessions together. It’ll be fun. The children are old enough to join in too.

I haven’t heard back from my auction vendor. If he doesn’t answer by tomorrow morning, I’ll have to bite the bullet and phone him to confirm he’s accepting the situation. Though mind you, I think silence speaks for itself; nevertheless, wuss though I may be I’m a dutiful one.

After my nearly sleepless night, I’d meant to have a nap this afternoon, but I didn’t get around to it.