After a really lazy weekend, I was full of energy today. And Weeza and Zerlina came to visit, so I was glad of it. Zerlina added to her repertoire of joined-together words – she’d picked up a napkin (yes, darlings, it was indeed a double damask dinner napkin) and played peep-bo with it. Then, putting it down, she remarked “went ‘boo!'”

This afternoon, I went in the car to the surgery to have my dressing removed. I decided I could just use one stick, so as not to be conspicuous and, the screen saying ‘0 minutes’ delay, I actually was called in a couple of minutes early. The two nurses and I were pretty impressed with how my hip has healed and I now don’t have a dressing on at all. Hooray! I can have a shower.

Indeed, darlings, I throw modesty to the winds. Weeza said “are you going to put a picture on your blog?” I admitted that I probably would, and she offered to take the picture. I have cropped it for modesty, but that means it is a bit startlingly close-up, so I’ve done it small and recommend that you don’t enlarge unless you feel very prepared. And I’ll put it at the bottom (heh) of the post by some way, so that if you don’t want to see it at all, you don’t have to. She also measured it and it’s 6″ long. 15 cm, if you prefer.

Afterwards, it felt a bit unprotected and, in case it hurt later, I trotted over the road to the chemist for some paracetamol, and then went into Al’s shop to say hello and buy some fruit. The Sage thought I would get vegetables too, but I reminded him that he was in charge of cooking and it was entirely up to him. Besides, potatoes and greens were all out of my reach, being low down.

What was really good was to just go about in a reasonably normal way. I’ve been sometimes using a stick for a while, so this wasn’t too odd. We went over to the bakers afterwards for macaroons, to celebrate. We bought a gingerbread animal decorated with Smarties for Zerlina, too. And later on, Dilly brought Squiffany and Pugsley in for the cousins to play together, so the day could hardly have been better really.

Later, I quite wanted a little lie-down. But I didn’t, because I knew I would fall asleep and then I wouldn’t sleep tonight. That reminds me, after all the kneeling shenanigans last night, although I recorded Mad Men, I watched it at the time anyway, so needn’t have bothered. Still, no harm done, hey. And I haven’t felt inclined to take any paracetamol, so that’s good.

I am not, I confess, going to last much longer without a drink. I’m not sure life is worth living. The anti-coagulant I’m taking for a month might, among numerous side-effects, impair liver function. Well, it only says ‘might’. And I eat a pretty low-fat diet, so that should help the liver. One little glass a day should be okay, don’t you think?

Right. Photo to follow. Stop here if you don’t care for bruised thigh. 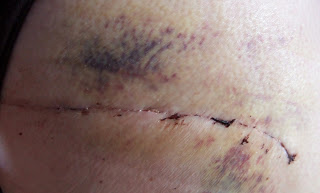