If you look at the third photo down from the previous post, you can see that there’s some standing water on a flat roof.  Weeza noticed it at once – but building maintenance organisation is part of her job and she’s observant anyway, which I’m not.  So I thought I’d better shin up and have a look.  Fortunately, though, there are two flat roofs, one atop a single storey (the larder and back lobby) and one above the porch and an upstairs bedroom.  So we got out the double ladder, but headed for the lower roof first.

I went up to check out what I’d need, and it seemed pretty okay, to my relief.  But, having gathered a few tools, I went again and discovered that actually getting on the roof wasn’t that easy for an unagile person like wot I am.  It’s the castellations, the up and down bits.  I knelt in one of the down sections, where there was just room, and wondered how to climb over.  So I leaned down and crawled down onto the roof. It was only about 10 inches.  25 cm.  You see how helpful I am to young people who aren’t au fait with the old-fashioned measurements I was brought up with – but it’s not so hard to be bilingual, in that respect at least.  I decided to worry about getting down again afterwards…

It didn’t take so long to gather up the moss from the roof and a bit of crud from the guttering; there was no blockage and it was simply wet, the other day, because of the overnight rain.  And I dropped (gloved) handfuls of muck down into a bucket on the ground, and that was fine.  And then I climbed over, backwards, and put my foot on the ladder – the second rung down felt more secure – and wondered what to do with my left leg, the arthritic one.  I slowly drew it up, but there was quite a stretch … but either I did it or I was stuck, and I did it.

I’ve left the second roof.  There’s no way I’m asking LT to go up there and, though I’m okay on ladders, I didn’t like that experience one bit.  It may wait until Weeza is here again.

In other news, we’ve lit a couple of small fires in the new stove, to dry everything out and ‘season’ it, and today we lit a bigger one.  So, from now on, we’re away.  It’s going to be fabulous, and it takes big logs, up to 18 inches.  That’s 45 centimetres, darlings, give or take. 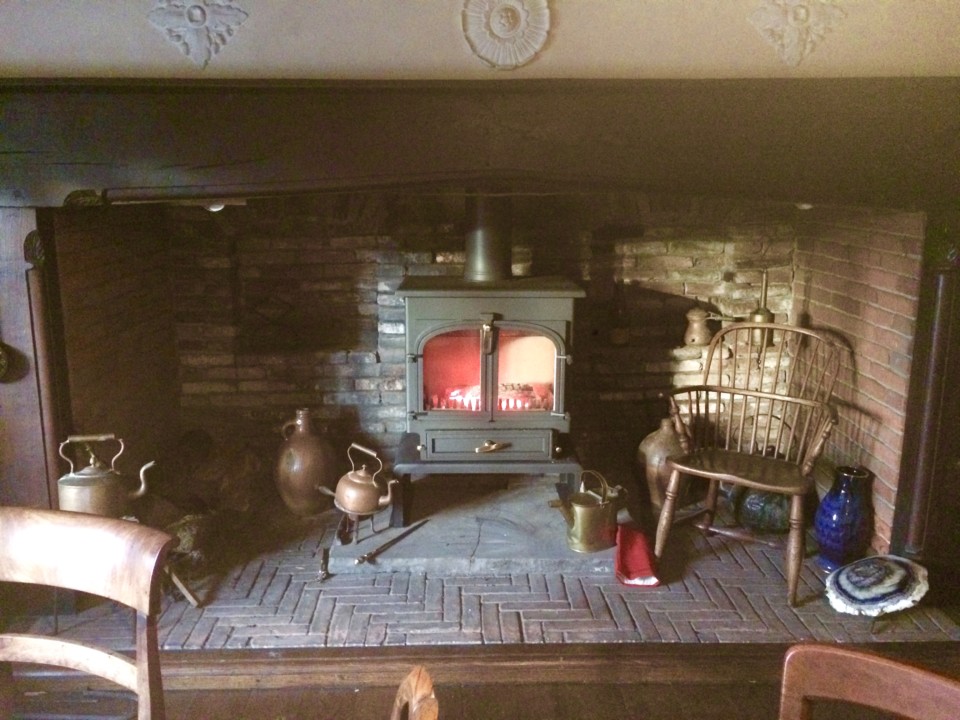 The fire was dying down by the time I snapped this.  And a bit of tweaking is required.  But I’m getting used to the smaller – but vastly warmer – stove and I’m very glad of it.  As is LT, of course, who’s looking forward to being warm this winter.

4 comments on “Z has her ups and downs”