Weeza emailed me first thing this morning to tell me that she’d lost her voice and suggest coming over to be entertained by sister-in-law and mother.  So that’s what happened.  The voice gradually returned during the day, going from Harpo Marx to Marge Simpson to almost normal Weeza by the time she went home.

After lunch, she and Dilly went off to the end-of-year assembly of the village school while I looked after Pugsley and the Sage minded Zerlina who was having her nap.  Later, we went off to the playing field to visit the playground equipment.  I enjoyed myself on the swing.  I do like swinging.  On a swing.

So, here are some pictures, though not of me swinging on a swing.  I am in one of them, almost hidden behind Squiffany.  Pugsley is on her bike – she pushed Zerlina’s pushchair instead.  It was big for him, but he managed the pedalling very well. 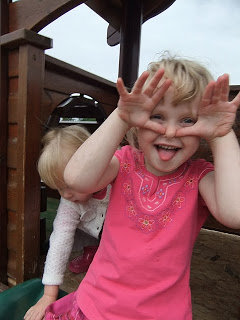 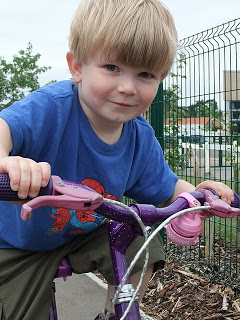