It was a brilliant day.  I’d invited Ro and Dora and Al, Dilly and the children, but hadn’t asked Weeza, Phil and co because Dilly had had a bad cold in the week, and didn’t want to pass it on to Gus.  However, while I was out at church, the Sage phoned and invited them anyway.  Apparently, he’d been going to not tell me, for a surprise – you’d think, after all these years, that he’d know better?  Anyway, Weeza vetoed that, so I cooked a pound of chipolatas, just to augment the 6 pounds of pork in case there wasn’t enough food.  It all got eaten.  Dilly had made a blackberry and apple crumble, Weeza bought ice cream, I made custard, so pudding was taken care of too.  It was one of those days when there was a lovely atmosphere and everyone had fun.

I’m a bit busy this evening, because I’m off to London for a couple of days and haven’t started to get ready yet.  I’m hoping that the two blog meets that I’ve set up will happen okay – sure that one will, but the other person hasn’t yet confirmed and I don’t know where or what time yet, and have only the pseudonymous email address and no phone number.  May have to tweet, but I avoid Twitter almost entirely.  Too many social networks already, can’t get involved in another, though I have an account.

It’s not yet December, so I apologise for the subject of this picture, but it is at least Advent, so officially the Christmas season.  I thought it was jolly good for a child who is only just five years old. 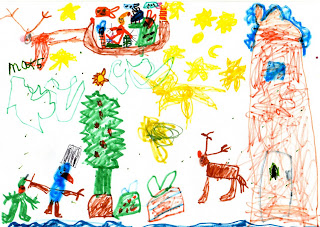 And now, I must go.  I’m not sure if I’ll blog while I’m away; if not, I’ll see you on Wednesday evening.  Be awfully good, darlings, while I’m not here to keep an eye on you.