Excellent to see so many friends today, really lovely. It was a meeting of the society I used to chair, so everyone knows me and it’s all very enjoyable. Afterwards, I did a very small amount of shopping – half a pound of tea from a most excellent shop, Wilkinson’s, which is the only place in Norwich I know that I can buy Rose Pouchong, as well as various interesting other teas and coffees. They have a huge choice and lovely staff.

After that, a brief errand for the Sage and I walked down to the cathedral, where he was picking me up, and we came home. This afternoon, however, I was exhausted. I went to bed for a nap and slept for two hours. Actually, I then had supper in bed and have only just got up in time to get undressed and go right back there. I know I’m going to sleep badly tonight though as a consequence.

I’m sure it’s anaemia, exacerbated by the anticoagulants – I feel full of energy until I actually do anything much. This morning, I stood chatting for about half an hour – not in one place, I was moving around to see different people – but by the end, I was glad to sit down. Then I sat for an hour, then walked half a mile, tops. It really isn’t much to lay me low so thoroughly. But when my HB level was down around 9, many years ago, I was given iron injections, though I felt much worse then and at least now I don’t feel in the least low or depressed (I don’t know what it is now, but it dropped from 12.8 to 9.2 following the operation). I’ve been guiltily admitting laziness, but maybe I’m just not quite up to more than I’m doing. Well, not much more, anyway 😉 At least I cooked the Sage’s lunch – it was only scrambled eggs, but a gesture, anyway.

I want to make marmalade next week, while Al still has Seville oranges. We’re on our last pot from two years ago – I made enough then to not have to bother last winter. I’ve always done it by squeezing the oranges, slicing the raw peel etc, but I’m wondering whether to have a go at cooking the oranges whole and then cutting them up afterwards. It seems as though it would be quicker and less effort, but a great deal messier because of fishing out all the pips from the sticky fruit. Anyone got a view on the subject? I’ve tried using the food processor to slice the peel but I haven’t found it entirely satisfactory, and I don’t want to chop it as I like shreds of peel and clear, not cloudy, marmalade. 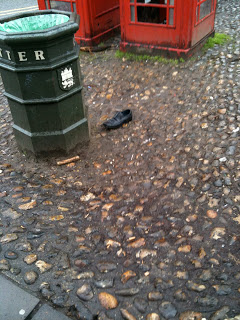 Random shoe in Tombland (this is the road outside the cathedral, there are no visible tombs)