Half past nine and it’s very quiet.  R went off to a meeting several hours ago and it must have gone on longer than he expected, assuming he hasn’t got lost on the way home.  I said I’d cook dinner when he got back, but might have already eaten – and I had some cheese and a hard-boiled egg and then I had a slice of bread and butter and then – oh dear – I had a packet of crisps and then all that food rather too early made me tired, so I had some beer.  And now I’m not tired, but I’ve eaten far too much to want dinner, so it’ll probably be toast and Marmite later, in the bath.  Me in the bath, that is.

Paff tells me that the nutritional content of BCS isn’t all it might be – she’s given a helpful link in the comments on the previous post – so Ben’s favourite food will have to be taken from him.  Except, I’ve had a brilliant idea – he really does adore it, so it occurs to me that it’s an ideal snack for training purposes.  A few of them in my pocket and he’ll do anything I ask of him, I’m sure.  Well, as long as I’ve got him on a lead.  I so want to be able to let him run freely, but I can’t risk him running on the road.

I’ve done nothing of note today, darlings.  I’m so sorry to be awfully boring.  The bed where courgettes will go has been weeded and I’ve finally cleared a suitable space for sweet peas and planted them – I’d potted them up and they’re lovely, healthy plants, not pot-bound. Next, I must tackle the greenhouse where I’m putting tomatoes etc.  I’ve got too many plants.  Not a whole lot too many, but more than I need the crop from.

Another greengrocer opened in town last week, which is jolly good.  That is, I shall shop at both because they must be encouraged. However, I can’t help thinking that neither of them is as good as Al’s shop used to be.  He used to have such a wide range and went to huge trouble every day with his outside display. 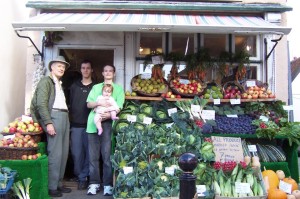 See what I mean?

Now 10 o’clock and R has phoned to say he’s on his way home.  Very thoughtful of him – and he’s not daft, he’s no doubt hoping that dinner will be waiting!