Tim has found the best example evah of splendidly awry grammar, which looks like nonsense at first glance but actually makes complete sense.  I’ve sent it to the Headmaster, who will love it too.

“A father goes up to his son’s bedroom, a book about Australia under his arm, ready to read him to sleep. The boy notices the book and says: ‘Daddy, what did you bring that book that I don’t want to be read to out of about down under up for?’”

The Sage has gone out for the day, to have lunch with a friend, and I’m going to be out for an hour or so tonight at an open evening at our Skills Academy – I’ll tell you more about that one day soon.

The wisteria is just starting to open, but is mainly still in tight bud, showing little colour as yet.  Pat asked about its colour – no, I didn’t enhance anything on the current header picture, but it was late afternoon when I took the picture.  The house faces west so the sun was behind me.  You can see the moon in the sky to the right of the house.

I looked up other photos of the wisteria … actually, I was looking for the original of that one, wondering when it was taken, and found other examples too from different years. 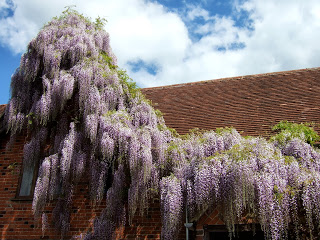 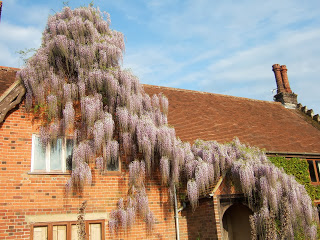 And 25th May 2010
And I shall trot out into the rain to show you what it looks like today. 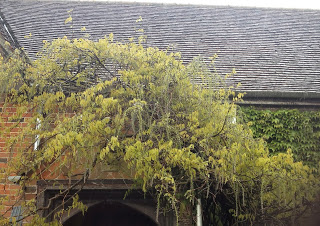 24th May 2013
Well, at least it hasn’t been hit by frost. We cut it back from the gable end every few years because it gets under the tiles, so it’s rather less rampant this year than some others, but my point is to demonstrate how late the season is this year.