Today has been unexpectedly enjoyable. I’m still plugging away, slowly tidying up the grungy bits of the vegetable garden – I should mention that no other part of the garden has been touched. I’ve done some hedge cutting, but that’s all and the weeds are flowering nicely at the front of the house. This morning, another cow was brought, two of the four having been taken back to the farm last week, as their calves are due before long. The farmer used to take them a few days before their due dates, but he takes them earlier now as the upheaval of a move can start them into labour if it’s done late. The Sage went out to lend a hand, as some pruned branches from a pine tree were in front of the gate. The phone rang and I went to check if he could take the call. I saw the men with a friskily dancing cow and told the caller that he’d phone back.

“She’ll soon settle down,” he assured me, when he returned. “Just pleased to be here. She’s number 99 and her name is Davy Crockett.”

Later, he called to me to come and see this. 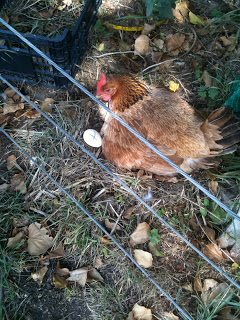 When the truck came for the cows last week, the sit-on mower that the Sage had parked in front of the gate (I know, he does rather block gates) was in the way so they moved it, and the chicken hastily moved too.  She was sitting on three old eggs – the Sage always leaves at least one egg where hens are laying as then they go back there – if you remove them all, they find another place to lay and it then has to be searched for.  He marks these eggs with a black cross so that they aren’t accidentally brought into the kitchen for use.

So, Johnny was careful not to drive over the eggs and the mower was then put back in place, and the Sage thought no more about it.  But then he found her a few yards away, under a tree – sitting on those same marked eggs.  She must have carefully rolled them into a new and safer place.  I took one out to photograph – a couple of seconds after I took the picture, she nudged it back under her.

The next thing I had to do was deliver Meals on Wheels.  I’d been sent some questionnaires for the old people to fill in, so I took them round and explained and offered to come back to help.  One couple took me up on the offer, so I returned later and sat down in the kitchen with the wife.  She said that, though she can see well enough to get about, she can’t read any more.  It turned out to be unexpectedly heart-warming.  She is completely happy with her life.  She is 88, her husband is 92, their daughter lives opposite and spends half a day every week thoroughly cleaning the bungalow and doing any ironing or anything, and she does all the shopping.  A grandson visits from Norwich every week and her sister phones every morning, and she phones back every evening.  She can manage all the cooking and general tidying, she loves her garden – there is no improvement she can think of to want, and nothing she would change.  Her pretty face beamed as she described it all to me.  The meals we deliver are just what she likes and the quantity and price are right too.

And this evening, I went to the school to look at the exhibition of A Level art and technology.  It was superb.  I was genuinely impressed – I’m very unartistic, but I am reasonably knowledgeable and interested, and there was some really good work there.  Furthermore, there was an air of confidence and enthusiasm about the work that was lovely to feel.  The department staff were there, offering drinks, canapés and a greeting and were obviously proud of their students.

Call me a sentimental old bat and I won’t argue, but it’s been a good day,