… a couple of days make. 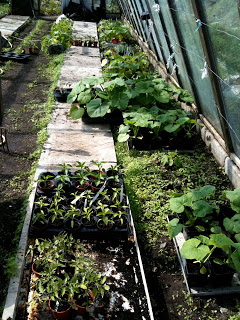 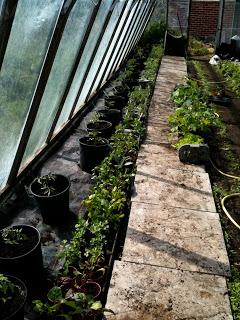 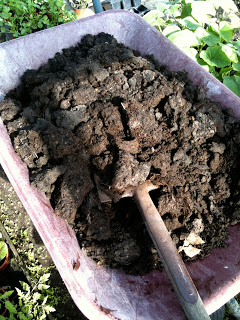 And, with the addition of some well-rotted (and completely odourless) manure, afterwards.

The stuff on the left, with the exception, of course, of the tomatoes in the big pots, is available for the shop, as are peppers and aubergines on the right. The sweetcorn and several varieties of squashes and pumpkins are going to be planted when I get home.

I meant to take a photo of the veg garden too, with its rows of five sorts of beans, plus herbs, lettuce, spinach, chard and courgettes (and anything I’ve forgotten about) but I didn’t get around to it as Tilly was hoping for her dinner. Well, I went out afterwards to pot up aubergines, but when I finished the Sage was hoping for his dinner, so it still didn’t get done.

I’d promised to make a card for everyone with phone numbers on – it had seemed a good idea, at one stage, to put the National society logo on them, and I fiddled round for ages because I’m not very good at this sort of thing, finally got it done and then printed out a sheet – and the blue of the logo was streaky. I tested and cleaned the print head – all the other colours were fine, it was just the blue. So, I thought, it doesn’t matter, I’ll print it in black and white. it wouldn’t. As the ink cartridge was nearing its end, I decided to change it. The new one was no better.

The Sage had his dinner late. I’ve emailed it to Dilly and she will print it out for me. I’ve had enough.