Right, so now I’ve proved to everyone’s satisfaction that I can’t draw, not even straight lines, and you’ve roundly teased me for it, I’ll continue with my story.

We moved in the day before Ro’s second birthday, and this was also the start of the school summer holidays, which gave us plenty of time to settle in and start to get to know people.  I can’t remember much about what we did, specifically, but I do recall a very happy time.  As I said, I felt at home straight away, rather to my surprise, and there was plenty to do in the house and garden.

The vegetable garden was not in a convenient place at all, and an ash tree overshadowed it.  I wanted a large greenhouse – this had been a stipulation when we moved here.  I’d had two in my last garden, one was 12′ long and the other 8′ and I wanted nothing less.  In the end, the best value turned out to be three  greenhouses, each 10′ x 8′, which worked out less expensive than two 12′ ones.  We erected them end to end, with closable doors in between.  We removed the turf from an area of lawn where my father-in-law used to practise golf shots and stacked it to rot down, and prepared my kitchen garden.

And a picture will paint another thousand words here, so I’ve picked up my pencil again, and a ruler too this time (the left line doesn’t look quite straight because I had the paper on my knee to take a photo and it sagged slightly). 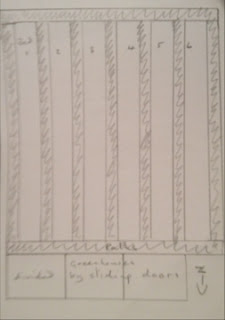 The shaded areas are paths and the white ones the beds.  I drew it from the side, so what looks like a Z with an arrow beneath is actually N, showing the direction of north.  *Sigh*  Yes, I know.  Just think what it’s like actually being me.  It’s not very clear, so I’ll tell you that what I’ve written across the bottom of the picture is ‘Greenhouses divided by sliding doors.’

Each bed was 4′ by 30-something ‘ – I can’t now remember whether the length of the beds is 38′ or the beds plus the paths at each end is 38′: ie, the beds are 34′ long.  You can deduce that each path is 2’ wide.  The paths were made of concrete and this had several benefits – the obvious ones are neatness, not digging and fertilising areas that were to be walked on and (in this dry area and with our sandy soil, quite an important consideration) not watering areas that were not growing crops – indeed, rain ran off the paths onto the beds.  I wasn’t going to have to walk on the beds often, as I could reach the middle from either side, and I could put fleece, cloches or netting over the beds easily.  They were easier to maintain: even if I didn’t use one of the beds for a year, the weeds would not encroach on the rest of the garden and the digging and weeding could be done in manageable sections.  There was yet another benefit that I hadn’t taken into account, which was that the concrete held the warmth of the sun and helped to warm the soil.  All in all, it was one of my better ideas.

Since then, the kitchen garden has been enlarged considerably, but this was the original set-up.

Once the paths had been laid, the rotted-down turves were dug in, along with a lot of cow muck, and I was able to start growing vegetables the next spring.  I grew flowers for cutting in those days too – cornflowers, sweet peas, all sorts of things, and had flowers in every room for much of the summer.

I loved my greenhouse and it became my refuge when I needed a break from the family.  Any of them was welcome to come and join me there and help with the potting up or whatever job I was doing, but total tranquillity was a firm condition.  If any child came complaining that they’d quarrelled with a sibling, they’d be chivvied straight out again.  If they just came to cool off and become relaxed again, that was fine.