The sale went very well, but it was unpredictable.  Some items went for a lot of money, others didn’t attract a bid.  The *star lot* was estimated at £8,000-£10,000 and went for £11,000 hammer price, £12,650 out of the saleroom, so that was very good.  A couple of things that didn’t meet their reserve have been sold afterwards for slightly less and some more will probably go in the next few days.

I’d been feeling quite down and dispirited for the previous couple of days and was struggling to build up any enthusiasm.  However, a necessity to look cheerful, be friendly, have a smile on your face and take an interest in what’s being said to you is a very good way of raising the spirits.  Behave as though you’re happy and you become much more happy, and so I did.  And in fact I quite enjoyed it.  What’s special about us is the personal touch – so, much of the time, I saw someone coming in and sitting down at the table (darlings, I’ve just remembered that I took pictures! – before viewing started, but it’ll show you what I mean), wrote their name on the registration list and took them a bidder number without asking them to sign in.  Not many salerooms where you get that level of personal touch.  In fact, people ring to apologise if they’re not going to make it, as if it’s a private party!

I had a list of people to phone and also some commission bids – usually the Sage puts those in his book, but if there’s something complicated, such as someone wanting to spend no more than a given amount altogether, or alternative bids (that is, if they aren’t successful in the first lot they bid for then they’ll bid for another, but only want one piece) then I take it on.  It went fine, I didn’t miss anyone and several of my customers were successful, but I managed to forget to hold up the bidder number every single time and Weeza had to ask.  D’oh, darlings, d’oh.  It must be extreme old age and decrepitude.

Anyway, here are pictures of the china.  Books were on a separate table.  84 lots of china.  I took three pictures so you’re getting three views, wicked waste makes woeful want, as they say. 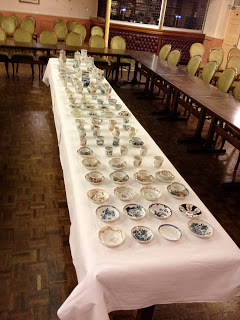 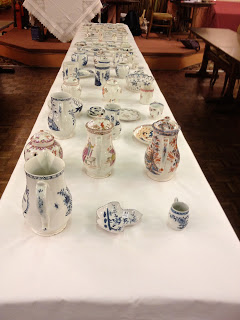 People sit on the chairs and we bring any pieces of china they would like to see.  They can handle anything they want to, but we pick it up from the central table and take it to them for safety, rather than let people mill around helping themselves.

The jug was put the wrong way round so that the inscription doesn’t show, so here’s a close-up.  £12,650, remember – very good condition, best part of 250 years old, but it’s the inscription that gives it its value. 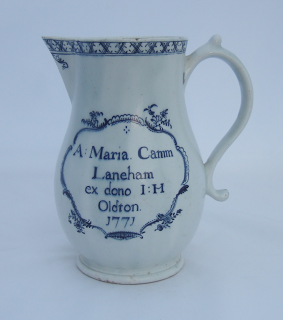