Our guest needed to do a bit of shopping yesterday and we decided to head for Lowestoft and take a stroll along the beach afterwards.  When we arrived, people were standing all along the side of the road.  So we parked, went to join them and asked what was happening.

It was the Tour de Lowestoft!  Or at any rate, the first leg of the Tour of Britain, and we were told the leaders would be along any minute.  And so they were, preceded by a lot of police motorbikes.  Four cyclists went swooping past – I was too busy clapping to take any photos of them as they went past and my friend said they were so fast that she didn’t catch them – and a few minutes later a whole lot more police motorbikes came by (we wondered why so many were required) followed by lots of cyclists, and then a whole lot of cars with spare bikes and bike parts on the roofs.  I’ve no idea why the four were several minutes out in front.  Anyway, it was brilliant, quite exciting and particularly as we hadn’t realised it was happening.

I did take pictures of the approach and also of the main pack of cyclists, in between applauding them. 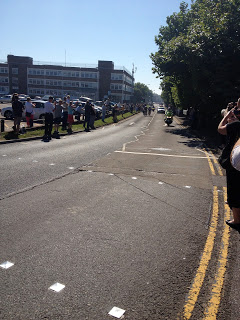 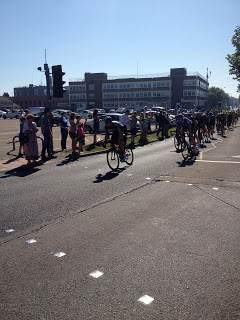 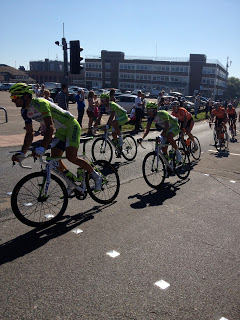 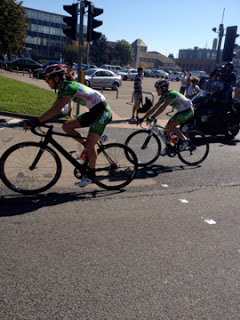 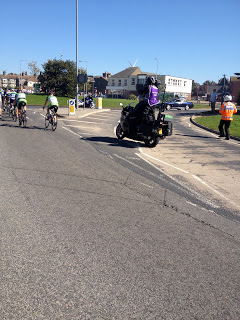 The spectators were nearly all on the same side of the road as we were at this junction because of the curve of the road. 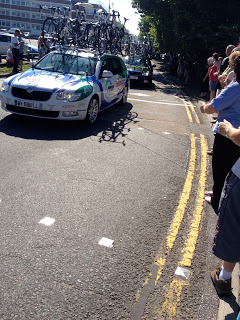 Later, we paddled in the sea and shared a tuna salad and a plate of chips.  Excellent.