We had a picnic at Dunwich – slight misunderstanding in that half of us headed for the heath and the others for the village, so phoned and agreed to eat separately and meet at Snape.  Between getting out of the car and arriving at the concert hall, I managed to lose our tickets, so had to go to the box office and get them reprinted.  Since that’s the second time I’ve turned up ticketless, I was glad it was a different person on duty today.

The hall was full of families, most of the children being quite small.  Squiffany, at eight, was one of the older ones.  As the orchestra tuned up, I said to Weeza that I’d rarely felt quite so middle class, with all these keen parents and grandparents wanting to introduce their tots to the orchestra.  However, I was way out.  The conductor gave a warm welcome and introduction and they played their first, unscheduled, piece which was a short extract from the Prince of the Pagodas (a Britten ballet, which I have to admit I don’t know at all).  And then he said that the children in the front dozen or so rows couldn’t see all the instruments and were at a disadvantage, and invited them onto the stage – all the tickets were the same price, it was down to speed of ordering.  Squiffany and Pugsley hung back, but Zerlina wanted to go and made her mother take her, whereupon Gus wanted to follow and I had to trail along too.  Once on the stage, she went and sat down on the floor among the first violins (small children were dotted all over the place) but he stood, looking a bit uncertain and I hovered too by the wall, in case I had to fetch him.

The piece started with Tallis’s theme (sorry, I should have said, it was Britten’s Young Person’s Guide to the Orchestra) and I thought Gus was going to be all right, and then suddenly he wailed.  I grabbed him and swept him away, as the conductor wryly, but with complete good humour, observed that we obviously had a critic who knew how the piece should be played.  A burst of laughter from the audience, and I took a seat that had been vacated by a child on the stage for the performance, which was a delight.  Zerlina was interested but composed throughout, but when the castanets were played she became animated, waving her hands in imitation of the action.  And looking at all these small children, perfectly behaved in the midst of the Hallé Orchestra, all engaged in the music and enjoying their moment in the spotlight of musical culture, that was the most middle class, in the nicest possible way, that I could imagine.

Later, since the weather was iffy, we went for a drink at the pub down the road, taking over their dining room for an hour or so while we chatted, and then went our separate ways.  And Dilly thinks she and the children will be able to come to the party for a while after all, as the other event they’re going to isn’t  until the evening.  So that’s excellent.

One more thing – Mike and Ann spotted this shrub in their local churchyard and need help in identifying it.  Can anyone tell us what it is? 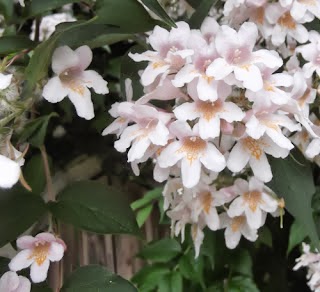 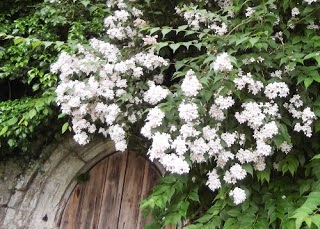