A while ago, I wrote a series of posts about this house, which my in-laws bought in 1928, the year after they were married: it was called The Close Connection.  I’ve just been looking back on some of them, and I saw that I’d said I should write about the Sage’s childhood stories, but I didn’t get around to it.  I said to him, four or five years ago, that I should write them down for him, but we didn’t get around to that either and, however many times one hears a tale, the details sometimes escape.  I’m going to have a go, though – there is sure to be some overlap with previous stories, but I reached my anecdotage long ago and trust you’ll pardon me.

He had an elder brother and sister, but he was actually his parents’ fifth child, as their twins, born a year after their marriage, were stillborn or died soon after birth.  So the safe arrival of their next son, Austin, born in 1930, was a relief, a joy and they adored him.  June was born a couple of years later, prematurely and her life was in danger for months.  She was so fragile that she used to be carried around on a cushion and, when she was cutting her first tooth, she ran such a high temperature that the doctor told her nursemaid to rub a thimble on her gums to help it through.  Many years later, June and Russell gave that nursemaid the gold thimble as a memento, to commemorate her fiftieth wedding anniversary.

Russell was born four years later in June 1936.  His mother used to call him Sprig, his childhood nickname.  Mother-like, she sometimes used it to the end of her days, though no one else did.

The only detail I know about his babyhood was his phobia of rubber.  There’s a most odd cine film somewhere, where he was sitting in the bath and someone had put a rubber ring round his waist, so he was crying in complete panic.  This film used to be put on sometimes and was watched with hilarious laughter by the family, which I couldn’t understand at all.  Why would you do that?  But it seemed to work, in that he completely got over the phobia as he grew up. 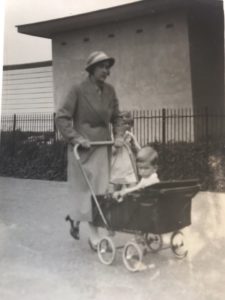 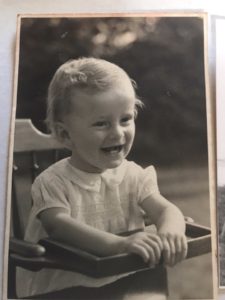 Here are a couple of photos of the Sprig – the first being pushed in his pram by his nursemaid, Hilda and the second which is marked in the album as one year old.