It’s been a medical day today.  I went for my routine mammogram and the Sage went for his routine discussion with our doctor, having had the 24-hour blood pressure monitor last week.  I assume all’s well with me – nothing on the photo made us go ‘eek’ but I’ll hear in a couple of weeks, and all is well with the Sage.  I have not raised his blood pressure to eruption point yet.

I fetched Pugsley and Squiffany and brought them home.  Pugsley had a haircut the other day, having robustly refused one before – his mother was reduced to snipping off bits and he always looked a bit homespun.  However, he has reached the age of reason and visited the hairdresser at last.  As a result, he isn’t always uncomfortably hot, so he was cheerful and calm, even when his ice lolly dripped.

The Sage was gone for ages.  A couple of hours.  He looked ever so cheerful when he got home and kissed me.  Yes, darlings, I know.  Then he produced from his pocket … his diary.  A nice person, probably a cleaner, had handed it in and he received a phone call to say so, and had hot-wheeled it over to Norwich station.

After a brief and gentle shower, it’s been another very hot day.  I do not complain.  I like it, and even those who long for shade would, most of them, grumble more if the weather was chilly.  One has to remember that ‘not too hot’ means ‘too cold’ or ‘too wet and windy’ or something equally undesirable.  I think this weather is delightful, because it’s so rare for more than the odd day. 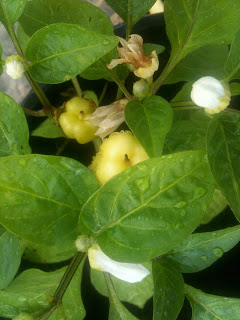 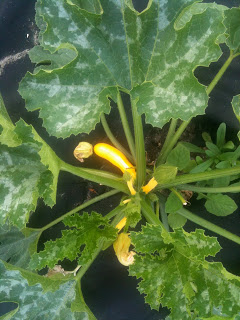 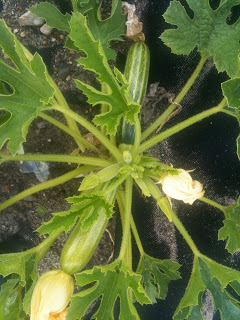 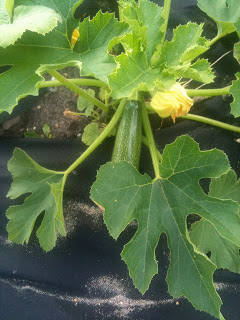 I took photos of vegetables – that is, botanically fruit but that’s being a bit silly.  Peppers, courgettes, swiss chard and peas.  We ate some of the courgettes this evening. 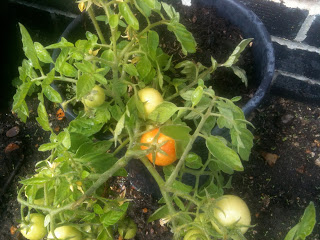 Oh – and, as last year, the outdoor tomatoes are going to be ready earlier than the greenhouse ones. Next year, I must try more bush varieties.

The funny thing is that I didn’t actually grow any yellow courgettes this year.  I grew Defender and Romanesco, both green.  Yet I have a plant with yellow fruit.  I don’t mind at all, but odd it is.