Bess was the only pedigree dog we ever had when I was a girl.  She was a black labrador, bred as a gundog – but she was terrified of loud noises.  Gunshy, they call it.  She’d have been put down as a failure, yet she was a beautiful, healthy dog.  My mother took her in.

She didn’t live in the house,  She had been born and brought up in a kennel and it took quite some time before she would enter the house at all.  It makes me wonder how harshly she had been treated.  After a while, she would come in during the day, but that was all.  Accommodation had to be built for her outside.

A while after she came to us, in the summer holidays, my mother came to me and told me that Bess had to stay in her run for a while.  “Don’t let her out,” she said.  Her godson Pearson, who spent several weeks during the summer with us for a number of years, was there too.  And a day or two later, we were outside the kennel looking at Bess.  So was Simon.  The two of them were running up and down, desperate to be together.  I don’t know which of us said it, but it was quite logical.  My mother said we weren’t to let Bess out, so we didn’t.  But there seemed to be no good reason not to let Simon in……….

After watching what went on, we were quite anxious, so went to tell my mother.

Look, darlings, we were children.  No one had told us anything.  How were we to know?

There were seven puppies, two blond boys and the rest black, a mixture of dogs and bitches.  The two blonds were Huckleberry and Kipper, and Huck will have his own chapter … no, Kipper must have his too, although he was given to our next-door neighbours.  Bess was an excellent, if slightly over-anxious mother.  I remember an occasion when the puppies were brought indoors – they didn’t live in the kennel, I think they were in the conservatory, which was outside the dining room.  I remember the plumbago and the nectarine tree which were in there for years (I could write reams about my childhood home, too). Bess watched, proud yet anxious.  One of the puppies made a mess on the dining room carpet.  Bess was horrified and embarrassed.  My mother went for paper and a cloth.  Bess looked wildly around – and licked up the little turd.  No, the literal little turd, darlings, she cleared it up.

She had the saddest of ends.  She absolutely adored my mother, who had shown her the first kindness and love she had ever known.  She was a big, powerful dog, very well trained although her love sometimes literally overwhelmed, she could knock my mother over without meaning to.  We went on holiday and Bess was sent to kennels … I don’t think that Simon and Huckleberry were, perhaps Bess was too difficult to look after and besides, she was used to a kennel.  However, she was frantic to return home.  She was shut up and escaped, she was tied up and escaped.  She was chained up.  The next morning, she was found dead.  She had turned round and round until the chain had strangled her.  Miss Coppithorne, the kennel owner, was distraught and apologetic, but no dog of ours has ever been sent to a kennel since then. 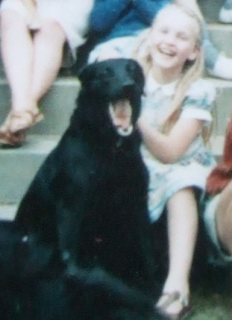 This is the only photo I have of Bess.  I’m with her, as if you didn’t recognise me.