Dora expected to come home from hospital mid to late afternoon and we agreed that I’d come over once she was home and cuddle the baby a while, to give her a chance to rest and Ro time to cook their dinner. 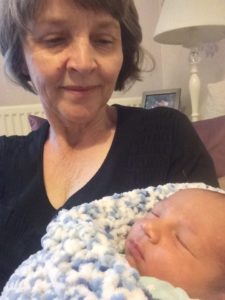 The reason I look so particularly un-camera-ready is that LT and I had been weeding the kitchen garden in the afternoon and were just finishing the second bed when thunder started to roll.  Now, if I’d just left and scurried indoors, all would have been well, but I thought I had time to feed the chickens and the barn cats and, halfway through doing this, it started to rain heavily.  Worse, I found that both drinkers in the hen house were completely dry and I couldn’t possibly leave them without water, so had to go and refill one of them.  By the time I got back to the house, I was drenched and so was LT, who’d come out with an umbrella to find me, but the brolly wasn’t much use in that storm.  So we both got changed and I dried my hair but otherwise just left myself au naturel.  Fortunately, I’m too old to mind too much.

This morning, Roses and Lawrence woke early, to find cows on the grass behind the annexe.  They weren’t the youngsters from our field and there were too many in any case, so she came through to call us.  All four of us hastily dressed and went out.  I hadn’t quite prepared myself for sixteen heifers, to tell the truth.  They were quite excited but in a partyish way, just out to have fun.  Lawrence went to shut the gate to the road (they’d got to here through another field, which is unfenced).  Clearly, putting them in with Johnny’s bullocks wouldn’t be a great idea, but I have another field which is due to be cut for hay and surrounded by a three-strand barbed wire fence.  So Roses went to open the gate, I scampered round the house to cut off their way through to my garden and the boys started to herd the cows.  I needed Roses to help with the blocking off as they thought they might come through the shrubbery, but it was fine otherwise.  They all hesitated at the gate but finally went through and I went to phone Johnny.  He knew the likely owner, contacted him and we all went back indoors.]

Roses and Lawrence went back to bed, LT made tea and I cooked bacon and eggs.  Later, I heard the trundle of a Land Rover pulling a trailer, went out and it was the farmer … who didn’t stop but drove round the drive and back out again.  I got in the car to follow but I wasn’t at the end of the drive in time to see which way he went, and had then to go to church as I was playing the organ.  By the time I got home, the cows had been removed – they must have been taken out by the gate they went in by and back across the arable field as they hadn’t gone by the road gate.  LT said no one had called and we were a bit surprised about it – but no matter, little trampling has been done on the field, which looks to have a pretty good hay crop, they were safe and didn’t get on the road and it was all pretty good fun from our point of view.  LT gets stuck in to this sort of thing with enthusiasm.  He says I’ve changed his life considerably – this just doesn’t happen in Reading.

*Kipper has been calling him Rusty, which I like but have tweaked to retain the Latin theme. Since Ro and Dora have called him after his grandpa, I’ll keep his second name as it is.

3 comments on “Rufus and a round-up”