I’ve just finished a job.  That is, the entire job, just about.  I’ve sent out the last mailing as Nadfas Area Secretary, all I have to do now is check through all the info to make sure it’s all in the right folders and give it to the incoming secretary.  It’s been more work than I’d envisaged when I agreed to take it on, four years ago, and it didn’t honestly suit the way I work best, though I didn’t discover that until it was too late.  I can’t say it’s been my finest achievement, although I never actually failed and got all the work done in time, every time.

As for the various things that went wrong, the first was here, before I even arrived in Ludlow.  I phoned Russell to say I’d got there and he sounded harassed and asked to phone back, because Big Pinkie and her friend Scarlet had got out.  Although the winds were nothing like the strength or duration that they’d been south of here, a large branch came down from the lovely oak tree on the drive and it took down the fence, enabling the cows to get out.  Russell arrived home from Bungay to find Pinkie on the drive, heading for the road.  He shut the gates of course and called the farmer – Alex and Dilly happened to arrive shortly afterwards and helped chivvy them towards the other field in the meantime.  It’s a huge branch and there was a fair amount of rot, which is upsetting – the trunk is ok as far as we can tell, and we’ll get advice on what to do for the best.  It’s a beautiful tree and it’s lost about a quarter of its crown.

The next morning, I had an automated phone call from my credit card company, fortunately having given them my mobile number.  To my alarm, it reported three suspicious transactions, or rather attempted ones, one for Tesco online, one for an internet company in America and one to Jimmy Choo in London- that last was for £500.  I have nothing but praise for how it was picked up and dealt with – all three had been declined and, as soon as I pressed the key to say I didn’t recognise any of the transactions, I was put through to a helpful person who reassured me and dealt with the situation.  I haven’t worked out yet how my card details were taken, but it was instantly cancelled and a new one was waiting for me when I arrived home.  All a bit disconcerting though, I’ve never had any problem before and I haven’t given details to anyone I wasn’t actually buying from – I didn’t respond to a spam email, for instance.

The third thing was an email I received within a short time of my arrival home.  Another of our candidates had withdrawn from next week’s Headteacher interviews.  We’re all frankly bemused that people apply for such a job and then change their minds – one or two might have a change of circumstances, but there have been six of them!  We cancelled the interviews back in September because we felt we didn’t have a wide enough choice, but this time we are carrying on with our remaining candidates.  They all are very strong, on paper at least, and we are reasonably hopeful of finding the ideal person.  But the governor who has taken on the timetabling of the two days of interviewing has had to draft it repeatedly, and we are now going to rejig the whole format because it won’t work with three.  I hardly knew how to email everyone to tell them, I felt it was my fault – though I know that’s silly. 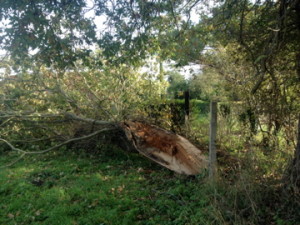 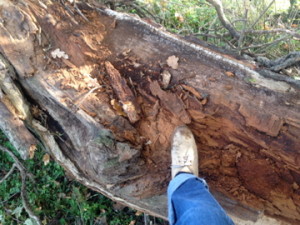 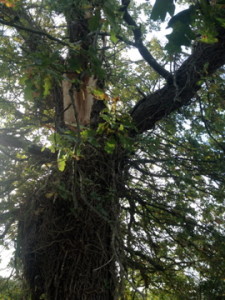 Here are pictures of our poor tree, with my size 5 foot to give you an idea of scale.  The wind also brought down a dead apple tree, which is now leaning against the back of the garages – fortunately, it hasn’t done any damage to speak of.  We won’t be short of firewood, that’s for sure.