I spent much of yesterday afternoon and evening sorting out the greenhouse.  There were various plants that had neither been sold nor planted and needed to be put on the compost heap or planted out, there were other plants that had to be put in their final pots and there were a lot of weeds.  It was too warm to work in there continuously and, when I came out for a breather, I surprised a very small bunny frolicking among the artichokes.  It scampered away and vanished over the wall – no, don’t be like that, not the fully-built part but the bit where there are only the foundations.  We put some wire the other side but a small rabbit could get underneath that.

The Sage was out, so I left it, because it wasn’t a one-person job to block the way, and when he did return, we found that the rabbit was back.  It was a dear little bunny and we really didn’t want to shoot it, our fortitude in that direction has been tested to its limits this year.  So we separated and drove it gradually in the direction we wanted it to go.  There are various bricks and suchlike around and, looking at the bunny, I didn’t look where I was going, so I’ve now got rather a lot of bruises and grazes.  We did the job however, the rabbit left the garden and we’ve thoroughly blocked the way it came in.  It won’t be a problem in another week or two when the wall has been built up a few more courses.

Today, we spent some time clearing a badly overgrown bed that used to be my herb garden.  It’s choked with tansy and nettles, mostly.  It had also, being thoroughly out of hand, been used to dump canes and pots and things…the worst of the clearance has been done, but I have to take everything down from stumps to ground level and then cover it with old carpet and leave it for a couple of years to kill the weeds.  But we did find, under a winter savoury bush, a partridge nest, with eight hatched and two addled eggs.  There had been a pair of French partridges in the garden and Dilly saw the mother with newly-hatched chicks a few weeks ago.

When I went for a rake to clear the cut weeds, I found the friendly brown bantam in the new bed by the wall, keenly scratching for insects.  The entrance, while awaiting its gate, is normally blocked off but I’ve been using it so had left it open and she didn’t need a formal invitation.  I left her, she was doing no harm – later, she moved round near where I was raking, so I dug up a patch of ground for her to rootle in.  She was asked to leave for her supper later on, which she did reluctantly.  She was a perfect guest and will be invited in future.

I haven’t finished planting out the bed, but a couple more goes should do it.  I might get out early tomorrow morning.  The greenhouse is looking good though.  The front field was cut yesterday and baled at once – it wasn’t a very good crop but not as bad as we’d expected – anyway, it was very dry so whether it’ll end up as hay or haylage, I don’t know.  I’m going to go along and glean the bits left to use as mulch in the greenhouse.

Which reminds me, I took a picture of the first cucumber in full flower yesterday.  Here it is – as ever, you are first in my thoughts so I’m sharing it with you. 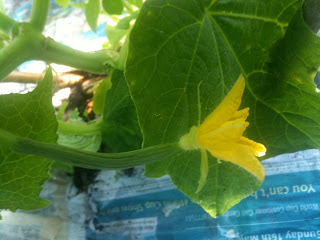 I’ll share the cucumber too, if you happen to be here when it is cut.

Yes indeed, it is small.  But it will grow quickly.  As you see, the present mulch is newspaper, which is working fine.  But dried grass will be more attractive and smell nice and, like the paper, it will soak up water and let it out again, thus keeping up humidity levels.

Yes, I know that tomatoes are happy with a drier atmosphere.  But, for this year at least, I can only cope with one greenhouse at a time.  So the tomatoes will have to compromise.

Interestingly, there is a shade of colour on some of the outside tomatoes, the bush variety named Maskotka.  I kept them indoors until June and then put them out in pots – last year they cropped before any of the greenhouse varieties, too.  Maybe I should try keeping a plant or two indoors for a really early crop.  I sowed all the seeds of my nine varieties in March.