Well, I don’t quite understand it.  This cheery get-up-and-go hasn’t yet (got up and gone, I mean, of course) and I’m still scurrying about, doing more jobs than are really quite necessary. This morning, I went out early, which turned out to be a Good Thing, as the shops were less busy than I expected.  At the butcher’s, all the assistants were busy but I didn’t have to queue, but by the time I left there were half a dozen people waiting.  I didn’t need that much as our Christmas beef is ordered for the weekend.  A similar story in the supermarket and other shops.

Russell has been asked to sell a collection of china, but he won’t hold another auction, so he has given the introduction to a firm of auctioneers a few miles north of Norwich.  They had given him catalogues and franked envelopes, but hadn’t realised that they have to go through their own post office.  The sale is only a week into January, so we had to take them back today. Or at least, Russell did, I offered to keep him company and he asked me to drive.  So we spent some time stuffing envelopes and addressing them.  On the way, we had a discussion on which way to go around Norwich.  The way he suggested was the one I thought would have most traffic, but he was right, it was the best (yes, I did tell him so) – all the same, we were out for a good couple of hours.

The weather forecast was dreadful – the wind and rain hadn’t reached us yet, though it was getting breezy, so I suggested getting outside jobs done while we could.  He fetched coal and took some boxes to burn, while I … darlings, I washed my car.  Look, it was filthy.  I had to clean the rear numberplate a couple of weeks ago, and have again since – surprising, how many people drive around with illegible (and illegal) numberplates.  After that, I planted the bulbs and plants that have been hanging around for a good couple of months, while they’re neither dried out nor frozen.  And then I came in and made the marzipan for the cake – yes, I know one should ideally do that earlier, but I like it fresh.  After that – are you exhausted, dearest hearts, reading the details of my entire day? – I wrapped a few more presents I’d bought, not entirely necessarily but just because I like my family.  And then we moved the grandfather clock and got the room ready for the pianola.

It arrived rather later than he’d said, I suspect it took some time to get into the trailer, and it wasn’t easy getting it into the house.  It’s appreciably larger than a regular piano and, though there was a bit of room to spare through the front door, it only just fitted through the hall and dining room doors.  But it’s in place and here it is. 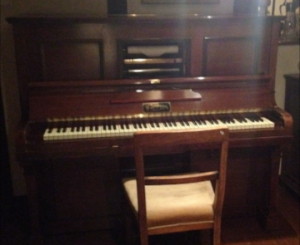 A very poor photo, I’m afraid, but the light was just above it and there was a reflection.  I’ve brought a piano stool through now.  My restorer had brought a roll of music, and I’ve put an extract on Facebook but no one has identified it yet, oddly enough – though moving the piano has taken it somewhat out of tune, of course – all the same, it’s quite recognisable, I think.  It needs to settle before it’s retuned, and I’m told to play it a lot because that will do it good.  It’s been completely remade, almost, the mechanism has been overhauled, the strings replaced, also the felt pads, and the bellows.  I asked again how much and he said he hasn’t worked it out yet…we’ve known him a very long time, several decades, and we’re all just trusting each other.

Later, after dinner, I wrote out all the carols for the service tomorrow evening.  I’d have done it days ago, but they have been changed since the meeting we had to decide them.  I don’t know why.  I only had the new lot today, so, apart from a run-through this evening, I’ve only got tomorrow.  It’s my own fault, though, that I haven’t been playing more.  The notes are not hard, it’s having enough breath for all of them.  Since I’d brought the hymn book from church, the first thing I played on the piano was from it, and happened to be Silent Night.  Poor Russell and Ben won’t have too many of those.  Ben was a bit disconcerted, especially by the clarinet.  Heh.  He’ll get used to it – though my setter, Chester, never did like it much.

The gale did arrive and, as I type, I hear things thumping about a bit in the garden.  When I went to turn the tap off after washing the car, I saw a small hen scurrying anxiously about outside the greenhouse where the chickens are living for the winter.  I told Russell, who went to let her in (she’d probably have run away from me) and we’re very glad she’s not having to roost in a tree on a night like this.

Pedalling the pianola is quite hard work, but he says he’ll oil something or other and it’ll be easier.  Though it’s good exercise.  I’m afraid the 14 second clip is too large to upload here, but I might be able to manage a shorter one.  Otherwise, I’ll have to resort to YouTube, I suppose, but it seems a bit over-complicated.  I’ll have a word with Ronan.