I’ve been looking for a picture of a cress dish and I found this one which, as you can see, is Worcester and clearly is not intended to have a cover – but what matters is that the piercings are shown. The cress is washed and put into the dish and the pierced holes allow surplus water to drip through onto the plate beneath.  I’ve seen a L’toft one, the owner showed it to me and the stand shown below would match exactly, printed pinecone pattern and all.  This stand was in my auction of October 2015 and it fetched £805.  This might seem a high price, but they are very rare and there were at least two people who really wanted it. 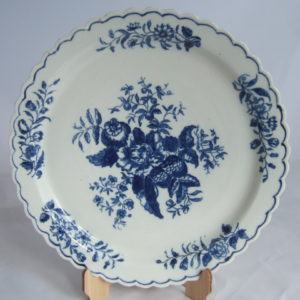 The Worcester one in the link is the same pattern, you can see – and how do we know which is Lowestoft and which is Worcester?  In brief, with experience.  I’m not a great expert on 18th century china and don’t pretend to be; all I know is Lowestoft though I’ve a reasonable working knowledge of other factories.

Worcester was certainly the more famous factory and sometimes a Lowestoft piece with a pattern also used by Worcester had a crescent mark underneath in imitation.  Naughty, hey.

In other news, the Christmas tree has been taken down, it being Twelfth Night, and the drawing room looks much less cluttered.

5 comments on “In passing…”