Gus is two years old and they celebrated, having had parties at the weekend, with a day on the beach and dinner out with us.

Gus and his sister shared dessert. 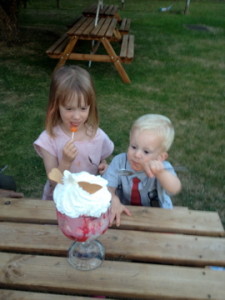 It was our second birthday party of the day.  It is Rupert the spaniel’s first birthday tomorrow and Hannah and Sam held a dogs’ party in their friend’s garden.  Apart from the two-legged hangers on, there were six party-goers.  I never did manage to get a photo of them all at the same time.  Rupert is the golden cocker spaniel, Ben and Teddy are golden retrievers, Mr Bingley is a black labrador, Monty is a black labradoodle and Blade is a border collie.

Actually, now I look again, all the dogs are in the last picture. Ben was the first to dive into the fishpond. One might have expected it.

Life should return to *normal* tomorrow, with Wink leaving for Wiltshire and birthdays over for this month.  However, it won’t be the last celebration this week – it having been Weeza and Phil’s eighth wedding anniversary yesterday, it will be Dilly and Al’s ninth on Saturday.

I haven’t had time to read blogs for a few days, I’ve hardly had time for Scrabble (but I catch up in the middle of the night, if need be).  Best score of the day was KENOTIC on a triple (and KIF) for 93 points.  I’ll be about tomorrow, though.