Ooh dear, this is turning into a habit.  I wake too early, the Sage wakes because I do, snuggles up and goes to sleep, and I lie there until it’s getting-up time and then have a nice little nap anyway, putting me behindhand for the rest of the day.

It’ll have to stop now though, I’ve got a busy week on.

Today, we went over to see Weeza.  Well, first, I’d played the music in church.  I received the hymns after I’d been down to the church yesterday to do the flowers, so couldn’t be arsed to go back and practise – I mean, darlings, one can lose freshness so easily by over-practising, don’t you think?  The fact that I didn’t actually know two of the hymns is neither here nor there.  I bluff, I bluff, hear me.

*now trying to remember what the original was.  I know what it’s from, of course, but what the second (and fourth, in repeat) word is, I can’t think.  If I can by the time I finish, I shall mention it of course.  As ever, CBATG.

Apart from repeatedly playing C sharp in one place in each verse, when the key was G, it was fine.  I nearly had a small hiccup when, finishing the final verse of the final hymn with a flourish, I suddenly noticed another ‘final final’ verse on the next page.  I noticed it in time not to miss it, fortunately.

Phil was doing a hundred mile bike ride today, the Norwich 100, which starts from the Cathedral, goes up through mid-Norfolk to Sheringham (buggering up the traffic in Cromer en route) and then returning by the coast road.  He did it in just over 7 hours, about 6 1/2 without the compulsory lunchtime stop.  Good job it wasn’t yesterday, when it was boiling hot.  He phoned from the Cathedral when he got back (only another 4 miles uphill to go, to be home) to suggest meeting at the pub for a Broadside.  I took photos. 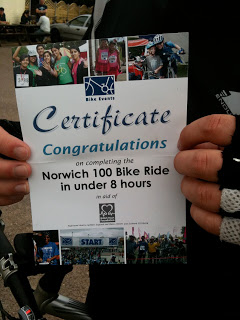 Yay, photos.  Obviously, not all of them are here.  Most had faces in. 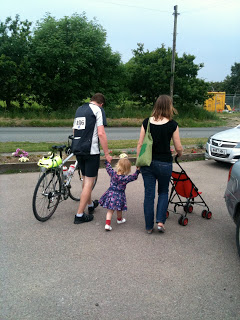 Afterwards, they walked home and we left to drive home.  Phil said that there had been torrential rain for a while – he didn’t have time to get on a coat and overshoes and, while waiting to be checked in at the Cathedral, he’d taken off his shoes and wrung rainwater out of his socks!  Mind you, he was quite sweaty too, as I found when I kissed him hello.  It didn’t seem quite polite to wipe my face, so I just had to be careful not to lick my lips – it’s not within the bounds of propriety to taste a son-in-law’s sweat. 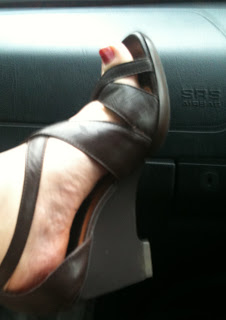 The good thing for me was that I was very comfortable walking a quarter of a mile or so in 3 inch *approx – the height of the length of my middle finger) heels. I’m so sorry, darlings, if I’d known I was going to take my photo I’d have had a pedicure first.