My wedding dress isn’t quite as I remembered it.  I thought it was yellow with splashy white flowers on and a big white collar – the flowers are small and the collar isn’t as big.  Still, the dress I found in the attic today is certainly the one.  A few tears – that is, I cried a bit, it isn’t ripped – but what’s the point of crying?  I did that before Russell died, I haven’t much since. 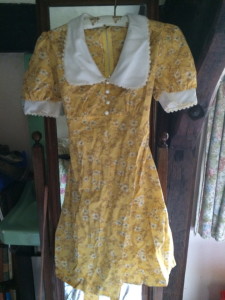 It cost £5 from Richards’ in Great Yarmouth and I bought it a few days before I got married in 1973.  When we moved here in 1986, I’d stopped wearing it – I did for several years – and stuffed it, with some other favourite dresses that I no longer wore, in a box, which is why it’s so crumpled.  Yes, I’ll try it on, but I won’t put up a photo.  A dress that suited me at 19 won’t do so now I’m 61.  The only reason I might show you would be to prove I’m the same size, and that’s just vanity, which is never a good thing,

In practical terms, clearing out that attic (there’s more of ’em to go) wasn’t as bad as I’d expected, it wasn’t nearly as full as I had thought it would be.  I felt very grubby afterwards though and longed for a hot bath, but Zerlina reminded me that I’d promised that we would make cakes.  So we did, while dinner was cooking and now, though I still feel mucky, I shall have a bath before bed and it was good to have fun with the children.