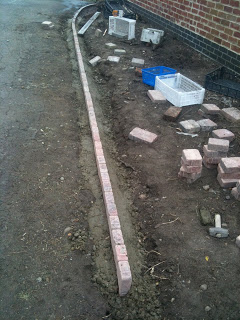 We have been working on both sides of the lawn.  The wall side, Jamie has almost finished the edging, he’s left the end so that the digger can get in.  There’s some brick rubble a few inches down which is quite a job to dig out, so we’ll take it away by digger and bring in some better soil and some muck.  That’s one of the next jobs.  I’m inclined to think that I’ll put in annuals this year because I’m not sure how many of the perennial weeds will come up again and it’ll be better to be able to dig it over thoroughly at the end of the summer.  I am wondering what I can put in that the chickens won’t eat or pull up, and not that hopeful!  He’s done more bricks than this actually, I evidently forgot to take a final picture.  At the point he’s finished, the bed is about 6 feet wide and increasing. 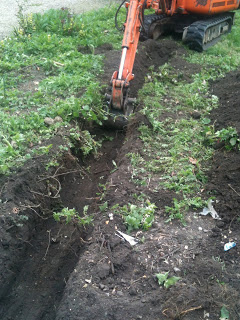 The other side of the lawn, there used to be a big laurel hedge which was taken out five years ago or so.  I’d spent two decades trying to keep it under control, but it had become so wide that anything less than six feet high looked out of proportion, and at that height it was so strong it grew quicker than I could keep it pruned.  I don’t mind losing some of the area to provide more parking space because the original intention of including it in the lawn has been rather thwarted by the chickens.  They are thrilled at the efforts we are making to dig over fresh earth for them, although the ground is so dry that there are not huge numbers of worms.  It’s poor sandy soil too. 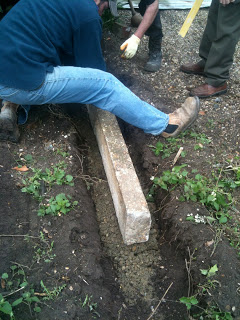 My chicken amused herself by hopping back and forth over the trench. 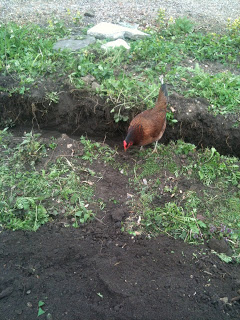 This is another of the bantams I’m particularly fond of. 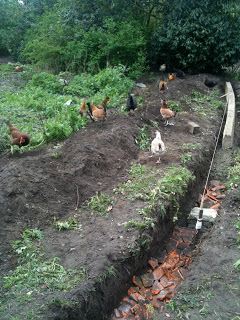 Later, several of them were out turning over the soil. 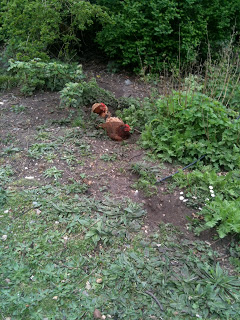 And at lunchtime, several had a dust bath. Yes, this is the edge of the lawn.  Chickens come a long way above grass in order of importance.

The edging looks lower than the ground, but it won’t be.  It’s the same height as the kerb the other side of the drive, so we’ll take some soil away. It will not be used in the garden, as it has ground elder in it. 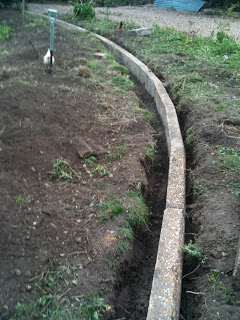