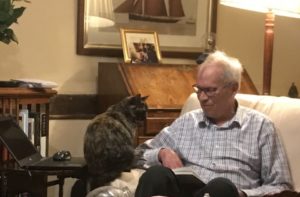 One of Eloise cat’s favourite places to sit is on the arm of the sofa, between LT and his laptop. 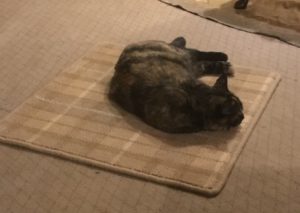 Another, at present, is on the carpet samples. Even better than a box, it seems.

But there’s a new member of the family, a cat called Chip. 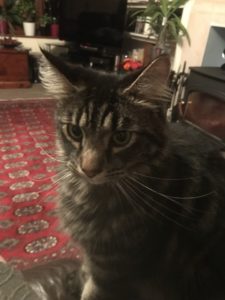 Some of you know that Rose’s other half, known in Bloggery as Lawrence, is receiving medical treatment in London.  He and Rose are dividing their time between his house, Rose’s house (i.e. my annexe), his sister’s house and the occasional hotel overnighter, when the timing doesn’t work any other way.  And his cat is finding it a strain.  He doesn’t mind going into a cattery, but you can’t keep doing that – anyway, the decision was made that he should come and live here for the time being.  But then Rose and Lawrence were going back to London and Boy wasn’t going to be here last night, so I went and sat with Chip for an hour or so.  And a charming cat he is.  He’s a big cat with large, very hairy ears and a long tail, quite fluffy.  Rummy wasn’t vastly impressed, but he didn’t seem to mind dreadfully, though Eloise cat was quite horrified and made her indignation very clear. 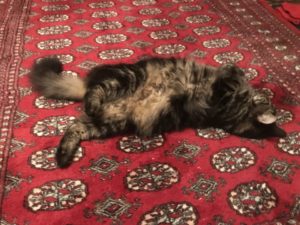 I was in bed and nearly asleep when I heard her complaining bitterly, and deduced that Chip had come through the cat flaps (we have three cat flaps altogether) and upstairs and she wasn’t happy.  I reckoned they could sort themselves out and went to sleep.  This morning, there was no sign of Chip.  So I’ve kept an eye out all day, and saw him coming out of the field behind the annexe into the garden at lunchtime, so wasn’t too worried, except that I have an overdeveloped sense of responsibility and was, in spite of my attempts at being rational, a bit fussed all day.

They’ve had a tedious journey back, having spent a long time stuck on the M25 – I’d lit the fire for them to welcome them and, gazing anxiously outside yet again, saw Chip in the garden.  He wouldn’t come near me, but at least Rummy came indoors (as he had earlier, to eat).  But as soon as Rose and Lawrence arrived, of course Chip strolled towards them and then straight into the house.

So now I know he clearly is not going to get lost and he can look after himself, I needn’t spend a day worrying again, innit.