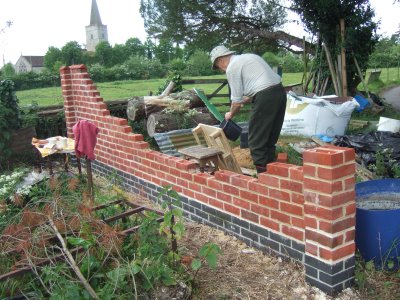 We’ve done about half of the first section, and so have built nearly one-tenth of the wall. Approximately. You can see what we did today because the fresh mortar is darker than the rest. I was a bit slower than I should have been because I’d made mistakes last week. I hadn’t been careful with my joins, so had occasionally made them too wide. Not by much, but these mistakes had to be corrected or else the final brick wouldn’t fit in the available gap in each row where it had happened. I started by making tight joints, but then decided to rub two bricks together (they are very soft bricks) end to end to make them minutely shorter and gradually correct the problem that way. Then the Sage helpfully filed a bit off the occasional brick and that made all the difference. You probably can’t tell, but the final brick in the course that’s completed; that is, the one in the middle of the gap, has rather a lot of mortar holding it in place because I’d been over-correcting for some time. Oh well, never mind. This short section is our first attempt, and I hope that by the end my workmanship will have considerably improved.

The other thing to observe, apart from my lovely husband, is that for the first time I was able to remove my sweater and work in my teeshirt. The forecast showers did not materialise and the sun shone most of the morning.

This was the second and last morning I had free this week, but we hope to crack on well next.

The Sage was upset today, to hear that an old friend had died. He had been the neighbour of a young family back in the ’60s when he lived in Ipswich and their young children had rather taken to him. They were much the ages of his niece and nephew, and he’d often been invited in for meals. Later, they moved to Melton Mowbray and he moved to Lowestoft but they always kept in touch. Ken had a debilitating stroke quite young, in his 50s, and Katie looked after him for many years, until he died a few years ago. She rang a few weeks ago to say she wasn’t too well and was out of hospital for a weekend, and today their daughter rang to say she’d died. She was only in her early 70s and it’s so sad that she and Ken weren’t able to enjoy their life together once their children had grown up.

Tilly was rather pleased with herself this afternoon. She asked for dinner so I gave it to her; later the Sage mentioned that he’d fed her (before I had). I don’t know why he hadn’t told me, as usually I feed her if I’m at home, but she got two full meals in the space of half an hour. Little rascal.