Dave soon got to work this morning, doing the capping on the first part of the longest stretch of wall. It had been lovely to see him – last time was back in October when I dropped in some shopping as he was under the weather with an illness from which he’s still recovering. We stopped abruptly, having hoped to finish that section before the winter, but no harm has been done by the frosts. 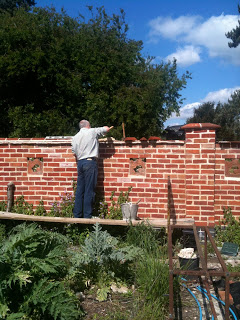 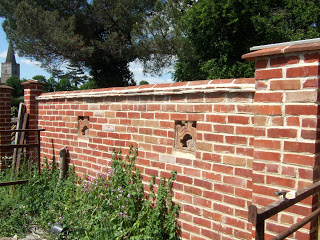 The tiles underneath the final capping are the original ones from this house – we had it re-roofed, with hand-made traditional tiles from a firm in Sussex; the Sage went with a lorry and fetched them himself. We kept the old ones of course, and are really pleased to find such an appropriate use for them. 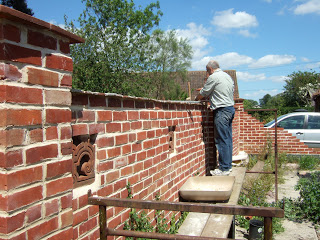 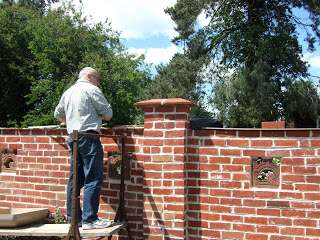 Then he got on with the next section – as you see, the first level of tiles is in place, to be followed next by the second tiles and then the capping next time.

I, meanwhile, had twigged that there wasn’t a job for me. The Sage doesn’t believe in talking things through in advance, and I’d cancelled my usual Friday session at Year 9 music – if he’d said, I’d have gone along as usual. I’d been working in the garden for quite some time already in fact, as I had a sleepless night, awake after half an hour’s nap at 1.15 and up from about 2.30. I did a particularly boring bit of work on the computer that I’m rather pleased to have got to grips with, well before the deadline, and was out before 6. It was a lovely day and I enjoyed planting the squashes that had been waiting in their pots. 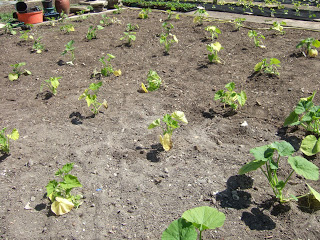 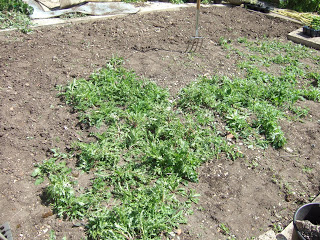 I spent the rest of the morning forking over and weeding the next bed, in preparation for more squashes. I was quite tired and my back ached and the Sage was going to help me, but first he needed to make a phone call and then some people arrived to see him. How lucky can a man be? Anyway, I got it done. I was interested to note that I have become a left-footed digger, having been right-footed all my life. For the last two or three years I haven’t been able to dig at all, having not enough strength either to put pressure on the spade or stand reliably on my right leg. I carefully placed all the plants with the use of a yardstick. The ground is very dry – I’ve watered thoroughly this afternoon. I’ve also weeded the greenhouse. I’ve put tomatoes, aubergines and peppers, sweet and hot, into pots this year, which are filled mostly with very well-rotted and completely odourless manure, and only planted the cucumbers direct into the bed. I found it impossible to keep up with the watering last year and am doing it differently this time. The pots are bottomless, so the roots can find coolness and moisture in the bed beneath.

There’s still loads to do, though. I’ve got a busy weekend to come.

We had lunch on the lawn, with bantams, the cock pheasant and a large rabbit wandering around. They hardly bother to move out of the way when we approach.