I arrived home from a most interesting lecture on the Parthenon and its marbles – the best preserved of which, of course, are residing in the British Museum and over whose eventual fate I am not partisan (and the lecturer did not express an opinion either). Dave and the Sage were already starting work. “It’s too chilly and windy for you,” opined the Sage. “I don’t mind,” I said. “I do,” he retorted. Dave agreed with him. So that’s that. I’ve come indoors for lunch (egg and chips) and to make scones (in the oven now) and i’ll add the photos when they’ve done. They’re just adding the cappings to the first section right now, which is quite exciting as it will be the first fully completed bit.

I’m feeling better today thank you, largely because of all the sleep I’ve had. I’ve been waking many times most nights of late – not in great pain but not being able to find a position that’s comfortable for long. So I’ve bought some long-lasting (12 hour) painkillers – just ibuprofen, which seems to work best, but in a slow-release form. I’m disinclined to take anything at all, but I have found in the past that there seems to be a sort of cumulative effect – that is, if I have occasion to take pills for several days, even if only once a day, then it’s much easier as the week goes by. So maybe I could take a 4-hour dose in the morning and a 12-hour dose in the evening and that would keep me going without me having a dismal feeling of being poisoned. Anyway, I do accept that Dave and the Sage are right that I’m probably best indoors at present – I don’t feel ill but I’ve still got a real graveyard cough. I had a pocketful of unwrapped lozenges this morning, so that I wouldn’t be taken unawares during the lecture.

Oh – I’ve been approached to join another committee next spring. It would be as secretary, and would be occasional bursts of a lot of work. I’m considering it. I don’t feel obliged, but I might be interested. However, I do remember that, three years ago, it was said that there was someone else interested in future, so I’ll remind the chairman of that first.

Photos to follow. I’ll take the scones out of the oven and then (wrapped up warm) I’ll take the camera out to get some pictures of Men At Work. 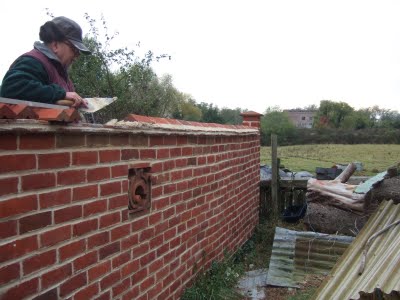 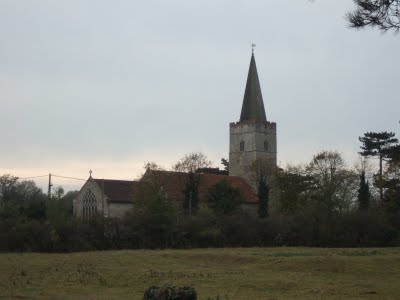 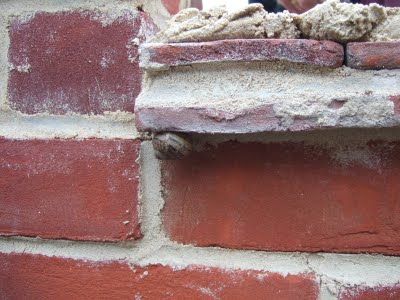 Just put one of the church in because it looks rather pleasant with the autumnal trees around. And you see that the wall has a resident snail, even before it’s finished. Evidently, there is a housing shortage around here.

There are a few videos to come, but they take ages to upload so I’ll publish this in the meantime.

Here’s the first –
and the second –
and the last one.

Dave is wearing a snug hat to keep his ears warm. The Sage phoned him to say it was chilly up on the scaffolding and to bring a hat.

A few more photos to come.
There was enough mortar to put on one of the hats but not the others, so the Sage laid a few bricks himself. 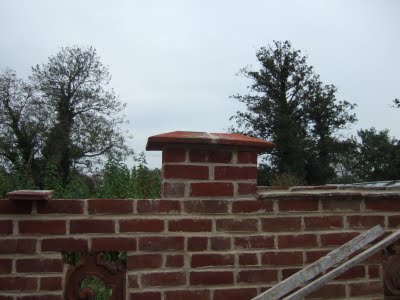 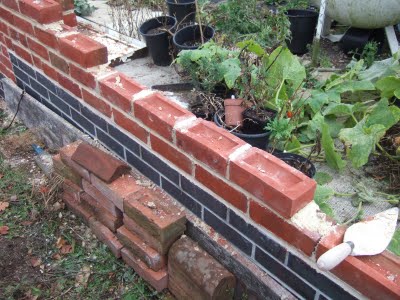 The finished part of the wall 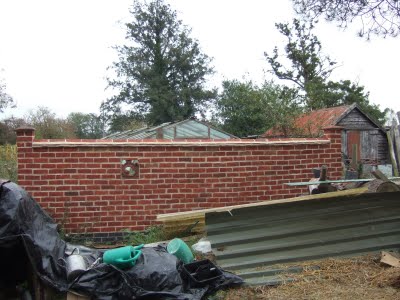 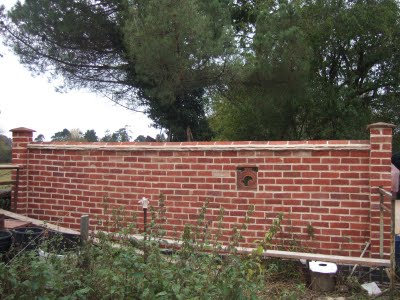 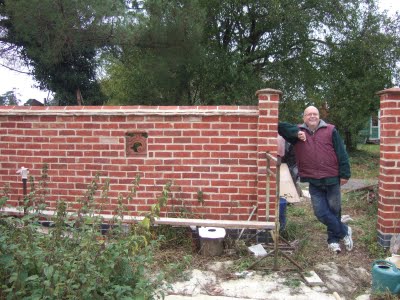 It had been intended that a piece of tile should just out either side of the capping, but then the men realised that water would run into the mortar, as some of the tiles curved down (this isn’t a matter of ‘should have put them in the other way up’, they curved all over the place) so decided to run the mortar down the line of the slope and bring it to the edge instead.
After all was done, the Sage said “goodbye” to Dave. “Don’t I get a cup of tea?” asked Dave, disappointedly. “I was promised a scone.”