Having tried out the capping for the wall, it was decided that the pillars would need to be a brick higher to provide a contrast. When you see the photos, they look a bit too high at present, but they won’t in the end. Dave had a couple of pillars to finish and the final bricks to add to the others. In the meantime, I was going to be set loose on the middle pillar in the stretch of wall that is yet to be done. The foundation bricks are on two levels; there is a drop just beyond the pillar, so the first thing to do was to add three courses of bricks to make that level.

“I’ll need half bricks, won’t I” I said. Dave and I stood and looked at it. Yes I would, but it meant that there would be five mortar joints one above the other. Of course, if the brickie had staggered the row it would have looked less neat when the red bricks were laid upon the grey masonry bricks, and for added strength he had put in a metal tie so it won’t make it a weak spot but it will look as if it is. 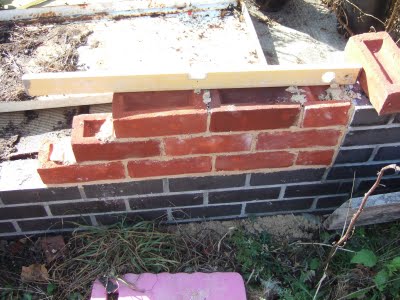 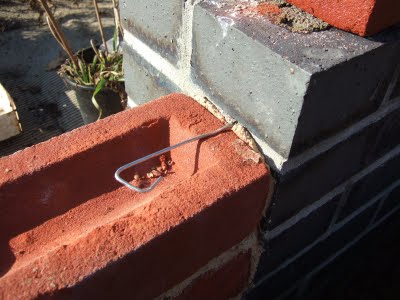 After I’d laid the first few bricks, I lost my confidence somewhat, and said that I’d rather build up the first course from the corner, rather than risk it being uneven. However, since there would only be enough mortar for me to put in a few more bricks, as Dave needs a great deal for filling in the centre of the columns, there wasn’t much point in starting and, with apologies to Dave for being a slacker, I stood and watched him for a while instead.
Photos of the Great Man Inaction 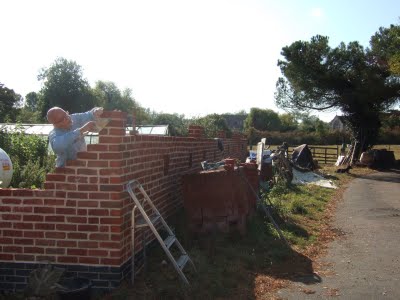 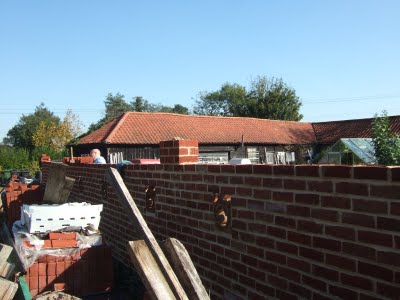 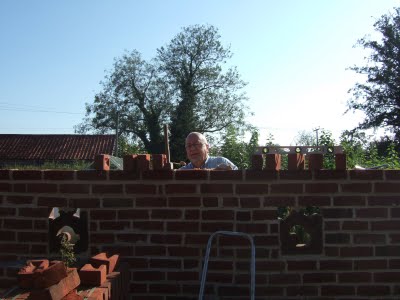 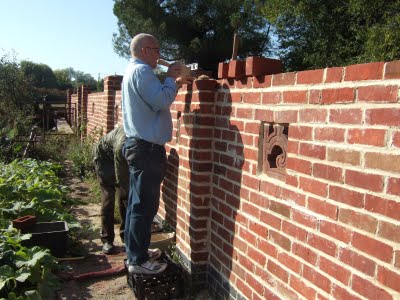 Second one down is of the final brick being pointed.

When Dave arrived, Scarlet and Pinkie came over to greet him, so we gave them their breakfast. By the end of the morning, they were contentedly lying down in the sunshine, ruminating.

It was chilly at first, but turned out to be a gorgeous morning, warm and sunny. We decided we could have lunch on the lawn, possibly for the last time this year. We had bacon sandwiches. I squirted HP sauce on mine, but the chaps are far too classy for that sort of stuff. Most of my toast went to the chickens that came and clustered round.

Later, the Sage went to put his latest eBay purchase in a cabinet in the drawing room. When he opened it, he noticed a new arrival. 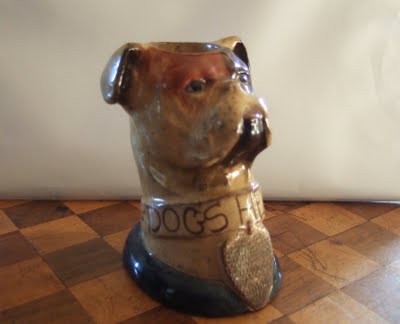 He rang Weeza, who denied knowing anything about it. Then he asked Dilly, who was equally innocent. He went to the shop to ask Al if he’d put it there. The thing is, it’s a clever joke because it actually is a match holder and striker, if not the finest specimen, and the Sage collects antique vesta cases, which are Victorian/Edwarian match holders. This dog would have stood on a bar (it’s got Guinness written the other side of the collar) and has a hole for matches on top of its head and a rough area for striking them in front of its neck and at the back of its head. Anyway, Al said he knew nothing about it either. We haven’t asked Ro yet, but he’s not been here for a couple of weeks and the Sage thinks he’d have noticed it since then. I’ve not opened the cabinet and might not have. It didn’t occur to the Sage to ask if I put it there, but I didn’t anyway. It’s an amusing joke and still a mystery. The pottery dog has a small chip on the back – it was probably 50p at a junk stall or car boot fair.