It didn’t go well from the start. The Sage reminded me that I hadn’t prepared the new Meals on Wheels sheet in time for the first of the month, so I spent some time doing them for the rest of the year – I usually do several months at a time, but we’ve had some uncertainty; one old man in failing health (he’s since died), another recovering from an operation in a convalescent home, and a couple about to move house, so I was doing them month by month to save alterations. Because of that, I didn’t have breakfast, so thought I’d grab something while the cement mixer was going.

Dave had just arrived and was helping the Sage carry bags of cement from the van when I received a call from Jeni, who lives across the field, asking if one of our cows was missing. I went and told the Sage and set off on my bike to check – the cows were on the other field across the beck where I couldn’t see them. It was apparent that she was one of ours; for one thing, the other four were clustered together talking to her anxiously. I cycled back to tell the Sage, who had been getting hammer and staples together, and cycled back while he was walking across the field. Fortunately, Brian the Cowman and Ollie the Cowman’s mate happened to arrive on their daily check of the cows, so they helped get the girl, whose name is 386 but whom I call Flossie for short, back in. “I must tell you,” said Brian, “Ollie said ‘that’s the Sage’s wife on her bike up ahead.’ ‘No it isn’t’, I said, ‘that’s a young girl’ “. I was indeed duly complimented, although I don’t think Brian’s eyesight’s what it used to be. We couldn’t find where Flossie had got out, but hammered in a few random staples and went back to work.

Oh, I forgot to mention that before Jeni rang, Al had phoned to ask if his father could fetch the day’s mushrooms as he was so busy. So that’s what the Sage did next, leaving Dave and me with a load of mortar.

It was very hot and humid, and after half an hour’s work, Dave and I stopped for breakfast – that is, I’d eaten a slice of dry bread and I suppose Dave had had something early that morning, but both of us felt a bit exhausted. So I made toast and tea and opened a pot of last year’s strawberry jam (I haven’t made any this year but still have plenty left) and we were relaxing on the lawn (not in a lounging way, we were sitting at the table like proper people do) when the Sage returned. We all started work again, and then Dilly came out. “Someone called Daphne says that one of the cows is out”. I got back on my bike and the Sage set off on foot. Flossie was on the path heading towards the road, so I headed her right back, and then the Sage found where she’d got out and politely invited her back in again. He needed a heavy hammer and another post, so I stood guard while he went to fetch them.

Frankly, by the time we’d done all this we didn’t want to do much else. We gave the cows some cabbages, corn and cauliflowers (Jeni had given them their daily apples), finished using the load of mortar and called it a morning. If it hadn’t been for Dave, not a lot would have happened at all. However, at least the end of the longest length of the wall has its full height of bricks, although the capping is to come. 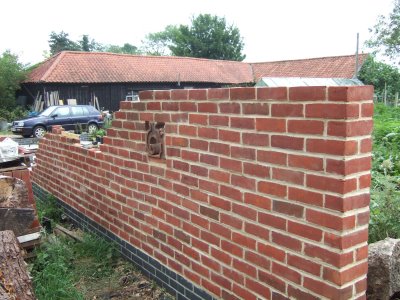 Weeza and Zerlina came over as we were finishing and joined us for lunch. z had her usual expression on her face. She was particularly happy to see Tilly. Those two really love each other. 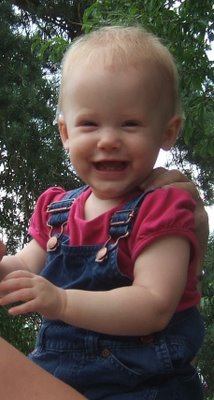 In the afternoon, Pugsley was going to go to nursery school for the first time. He was blowing hot and cold about it, but his mother encouraged him to look on it positively. She came home and reported that he’d strode in and announced “I’m Pugsley. Squiffany isn’t going to be here this afternoon so I’m here instead.” He introduced himself to everyone and bade her a casual ‘goodbye’. She and Squiff, Weeza and z went to the swimming pool to take Dilly’s mind off her son.

Later, I went through to see how he’d got on. He was upset when I went in the house – it soon transpired that he thought that meant I was going to babysit and Dilly was going out. We reassured him – I explained that if that was happening, she would have told him already. But it’s so clear that, however good the arrangements and however valuable good nurseries are, what little children really want most is their own mother or father looking after them most of the time.

By the way, Weeza has officially resigned from her job in London. She’s now a justahousewifeandmother – since she’s enjoying that and they’re managing financially, isn’t she lucky?

Oh, and I decided that I needed another lift. So now I’m up to 11 mm in my shoe. One more is half an inch. Since I initially thought 8 mm was enough, in March, it seems that my hip is failing faster than I’d expected – still has a few years in it I expect. I hate the thought of visibly built-up shoes, but there’s a limit to what you can put inside a shoe and still get it on your foot.