Very hot today when the sun was out, though there was more cloud than yesterday. Some time was spent discussing the ornamental bricks – at present, it seems likely that they will be put in as the first one has been. A change was made, in that a part-brick (cut horizontally) has been put in to minimise the gap. Dave has researched Tudor brickwork and it is correct to think that the curl is meant to look like a wave – but there are two placings where that would work, so it’s a matter of fitting them in best with the other bricks.

During the morning, Weeza phoned to say that the toddler pool heating had been accidentally switched off overnight so the baby swimming class was cancelled, and she and Zerlina came to call instead. We slapped plenty of suncream on both of them, and them Dilly looked after Zerlina while Weeza laid her first brick.

And this is what it looked like at the end of the morning. We’ll go up to 9 courses and then put in the ornamental bricks, then finish this section. 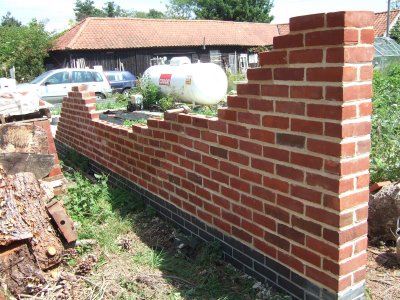 You can see the gas tank which the wall is intended to hide.
Tomorrow afternoon, I’m off to Kent for the weekend. I may have time to post in the morning – but I may not, as I’m looking after Squiffany and Pugsley – and, of course, I may have nothing to say in any case. Otherwise, and I hate to break it to you, there will be nothing from me until Sunday evening.
Zerlina has learned to wave goodbye. She waved to the phantam, to Dilly and her cousins, to Tilly and to the Sage and me. Last week she wasn’t very well and it took Tilly being sweet to bring the first smile to her face, but now she’s completely better and was as cheerful as ever. She has also, for the last week or so, been talking – in time-honoured fashion, her first word is “mama”, but she babbles expressively as well and is obviously convinced that she is fully communicating with us.