Since I’ve been on my own, I have been taking great care to eat well.  There are different ways of dealing with one’s daily bread, of course – I could batch cook and freeze portions, I could eat very simply and mostly live on salads and bought things, I could cook a big pot of soup or stew at the beginning of the week and live on that until it was used up.  I’ve not gone for the simple and labour-saving though, choosing to cook a meal for one every night.  That is, it’s not so unusual for there to be leftovers, but that was always the case anyway and that’s what lunch is for, as often as not.

There are differences, of course, from how I used to cook, but some of those changes happened while Russell was alive, because he could eat so little.  I’d already stopped cooking joints of meat or a whole chicken, for example.  Now, when someone comes round for a meal, I tend to over-cater and give the extra food to my guests to take away, explaining that I probably won’t eat it and it’ll only go to the chickens.  Another difference is that I use fewer potatoes, less rice and pasta, because I’m not too bothered about them unless they’re the point of the meal.  Tonight, for example, I made spaghetti carbonara – which is the perfect meal for one, with a salad – and the name has it really, you just can’t do without the pasta.  I might bake a potato and top it with a sauce of some sort or maybe cheese, but otherwise, if I do want potatoes, I roast them.  The Aga is always hot, so it’s no trouble.  And the fatty deliciousness sometimes fits the bill.  Usually, however, the carbohydrate element is simply left out and I have lots of other vegetables instead.

It sometimes mildly concerns me, my obsession with my food.  I often cook three times a day – for example, a poached egg for breakfast if the bantams have laid any, home-made soup for lunch, a stir-fry, fish or a fairly elaborately prepared recipe for supper.  I try not to waste anything – the reports of how much food we waste is all very well, but it does include bones, used teabags and anything else that is unusable, and certainly doesn’t differentiate between bones that have been used for stock and picked clean, and those that haven’t.  I do sometimes find that I can’t use up a carton of cream or yoghurt before it goes off, but usually I only buy it if I know I’ll use most of it.  Small cartons are relatively very expensive and one has to be strong-minded to resist the larger version for a few pence more, though having to eat the damn stuff at every meal does teach a valid lesson.  I have two pints of milk a week delivered, which is usually far more than I need – I’d got a bit of a build-up before I went away but I knew that Charlotte would use it, though I’ve given the final half pint to Roses this evening.  I’ll get more tomorrow.  I don’t mind that I pay as much for a pint as supermarkets charge for four, I don’t want to pay less for milk than it costs to produce.

Which reminds me, Jonny was on Farming Today last Sunday, it’ll still be available on Radio 4 on iPlayer if you’ve never heard him.  His expansion into selling raw milk at the farm gate and cheesemaking has brought him some fame in farming circles.

I am also reminded, sadly, that I arrived home yesterday to find a message on my answerphone from Jonny.  I’m sorry to say that Big Pinkie has had to be put down.  She was seventeen years old and hadn’t borne calves for several years, but had been kept as a pet because even a livestock farmer can be sentimental once in a while.  She got herself stuck behind a feeding pen and, though they helped her out, she just lay down and gave up and they had to have her put down.  In truth, I’m not too surprised as I looked at her when they took her back to the farm for the winter, knowing how old and frail she looked, and wondered if she would make it through the winter. 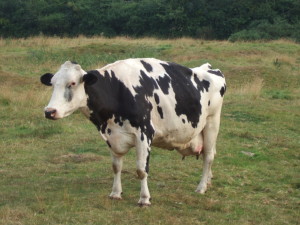 This photo was taken on 31st July 2008 and you can see she was quite an old girl there, so she did well.

I’m reminded again that Marian chose the Sermon on the Mount for her funeral reading and it was rather lovely.  And full of quotations, of course.  Salt of the earth and so on.

3 comments on “Blessed are the cheesemakers”