I had actually got the hoover out and ready to use, when Al came through asking for help.  There was a swarm of bees at the bottom of the garden.  It was from one of his three hives and they hadn’t gone far, just a few yards to the nearest tree.  Dilly was out in Norwich with her mother and sister, shopping.  I know that a swarm of bees is normally a gentle beast, so I was quick to volunteer to help and went next door to dress in Dilly’s beekeeper suit and my wellies.  Al couldn’t find his camera, nor could I mine, so I’ve captured the whole thing on the phone.  Not a picture of me in the suit though, I’m afraid.

Pictures aren’t going too well on Blogger at present, for a brief while one could arrange them nicely side by side, but now they seem to go in a line downwards again, so this may be a long post in every sense except the wooden one.  The long video is taking an age to load. 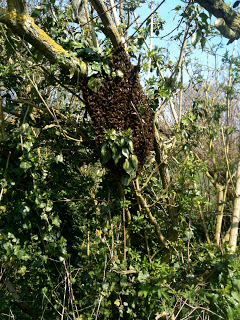 This is the swarm.  The text book way of securing them would be to tap them in one lot into a basket, or else cut off the branch and drop them that way.  However, they were clustered round in the crook of two branches of an elder, and it was not possible.  Al decided, instead, to brush as many as possible into the basket, trying to include the queen who would be in the centre, drop them on the sheet and they should then walk upwards and find the hive.

I was too interested in what he was doing to film it very well, but I got most of it – it seems that Blogger can’t cope with 50 seconds of video however, and it won’t load.  I’ll try editing it into bits tomorrow.  A swarm of bees is not dangerous unless they think you are threatening the queen.  As you see, they are completely docile here.  They were bewildered but not angry.  I had my suit on, but my right hand uncovered to use the phone camera (and Facebook, because I was excitedly live-FB-ing it) and no bee settled on me or tried to sting.  Even though Al was brushing right into the heart of the cluster, the hum of bees never became an angry buzz.

Their instinct is to walk uphill, so they started moving into the hive at once.  However, they would be looking for the queen.  If they didn’t find her, they would come out again, as you can hear Al explain to me.  Sadly, that droning voice saying “They’re going in”…”Right” is me. 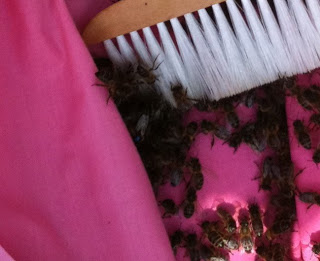 Al was the first to spot her, she still has her blue paint on – you mark your queen so that she’s easy to find, but the workers try to clean the paint off so it usually doesn’t last long.  I’ve zoomed in, you can just get a vague blue blur near the centre of the picture if you peer closely, though I thought I’d got her better than that.  Al chivvied her over towards the entrance, but she managed to get under the hive.  Luckily, she came out again a minute later and we both saw her walk in.  I was too interested in looking at her to remember to take a picture of the moment, I’m afraid. 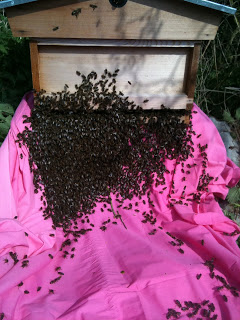 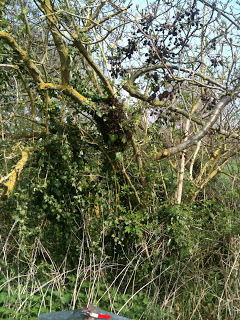 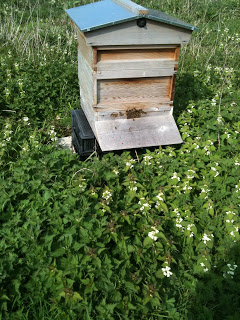 And here are pictures of the rest of the bees following her, apart from those still on the tree.  On my way back to the house, I took a picture of the hive that the swarm came from.  The queen, before leaving, will have left plenty of eggs.  Some of those would hatch out into queens.  Al will go through the hive, destroying most of the queen cells – which are easily recognised, being much bigger than ordinary egg cells – because if more than one hatches at the same time, there will be another swarm.  If one queen hatches first, she will destroy the other queen larvae herself.  A newly hatched larvae becomes a queen by being fed royal jelly by the workers, as you probably know.

Twenty minutes later, we heard a loud droning noise (not me, that time) and Al was concerned that the queen had rejected the hive and left again.  He hurried down the garden to look.  But it was all right.  The signal had gone out that the queen was in residence, and the rest of the bees from the tree and in the air were all going to their new home, all in one loud mass.  Within a few minutes, they were tranquilly out foraging again.  This evening, we moved the hive to its new situation by the rest of the hives.  It was a slightly awkward job as we were wading through nettles on uneven ground, but it went without problems.

I’ve offered to be apprentice Second Beekeeper for the rest of this year.  Dilly is rather too pregnant to want to put on the suit and it would be upsetting for her to be stung, now or with a new baby to care for. I’m not afraid of things buzzing around, won’t panic if I’m stung and do what I’m told quite nicely.  And the bees are fascinating.  I can see myself becoming as interested as Al, if I don’t watch out.