I learned to appreciate where I live today when I drove Zerlina over to a nearby small town, whose name differs from London by a single letter, reached by crossing the main Norwich to L’toft road.  We were meeting Weeza there because her boss, Tom,  had taken his car for repair and he’d asked her for a lift (in office time, he’s entirely fair) to pick it up.  It was the first time I’d met him, he’s charming.  He’s the owner of B*w*l*e*w00d and author of books about its inhabitants, and nephew of a Test Match Special (Radio 3) commentator, if you would like to pin him down.

It was the traffic on the way, though, that took us by surprise.  Fortunately, I’d allowed time in hand in case I couldn’t find the place, but I needed it for the waiting time.  For a start, we took several minutes to cross the main road, but then the hold-ups through Lo**on were awful.  It was bypassed many years ago and, for a long time, seemed a delightful place to live, but now it’s one long traffic jam.  Drivers become so desperate that they try to push their way through where there isn’t really room and, because of parking allowed all down the main street (though there’s a good-sized car park opposite), there aren’t enough passing places.

We were further delayed on the way back my an accident on the Yagnub bypass, so were out longer than we’d expected – not that it really mattered, as the dog and tortoises were fed and the chooks hadn’t gone to bed yet,

Anyway, it’s been a lovely day and we will miss Zerlina very much.  I hadn’t done any cleaning in the kitchen at all yesterday, with the result that the sink was full and the whole room looked messy (yes, darlings, even by my standards).  I’d promised her we’d make cakes, but I had to clear up first – and she helped valiantly.  She even swept the floor. 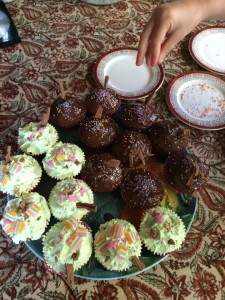 Here is the result of our baking and z’s decorating.  There were 17 in total (for her sake, I weighed in grams rather than ounces and that probably made it a bit light) and she ate one and R and I have taken one each to eat later.  I put the rest in two cake tins for her to take home.

It’s been quite tiring, I’ve been busy all day, but I’ve not thought about the amount of paperwork I have to do, so that’s been some respite.  R’s scan is tomorrow and I’m fearful of the result. He has lost more weight, though he has been eating better than he was earlier in the month.  *Better* might equate to what I’d eat if I were watching my weight, yet he has never done so and has been one of those people who can eat a lot and never put on a pound.  It’s odd to find myself eating more than he does, with the result that I’m eating less too – everything I have is very healthy; he adds ice cream more often than I do but it’s broadly similar.

Whatever the situation, I will aim to keep this blog upbeat.  That has helped me in the past and it does me no good to dwell on anxiety.  Onwards, if not necessarily upwards, darlings.

9 comments on “Azzentuate the pozitive”