You know the thing where one is asked to use three words to describe oneself?  Actually, I was told recently about an interview for a headteacher, where that was used as the final question.  One of the candidates gave, as one of his or her words … “lazy.”  No, didn’t get the job.

Anyway, I came across this on a website recently (and I have put it up on Google+ so a few of you have seen it) 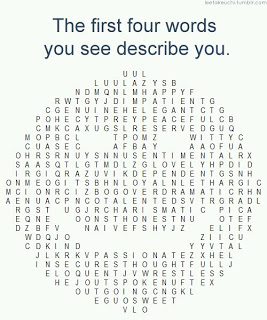 and the original attribution is there on the top right, though it had come along a few steps when I saw it – thanks to the person who devised it.  I shouldn’t take it too literally – although, if the first words you see don’t give a particularly positive image of yourself, you could give it a few minutes of thought.

I did, a few years ago, think of three words I might use to describe myself, but I admit that I can’t remember them all now.  I’m pretty sure that none of them was forgetful, but maybe it should have been.  I will tell you the one I do remember, which is ‘enthusiastic.’ Bless her, hopeful Z of those years.

However, perhaps more telling would be for you to choose your words and then ask other people to choose words for you and compare.  I’m pretty sure that one of the three that many would pick for me would be:-


I know, darlings, is there anything more dull? I wouldn’t use it to describe myself, but I’m called it too often to deny it.  It’s not used as an insult or criticism, I do appear to be a person that people are inclined to be kind to … although I don’t mind in the least being criticised.  How can one learn if one doesn’t listen to what people say?  I don’t suppose I’ll ever learn much, on the other hand – no, I’m starting to ramble.

I don’t think it is on the list above, by the way, that is put there simply for you to amuse yourselves for a few idle minutes.

And this morning, I have mostly been making potato soup.  Sensible, you see?