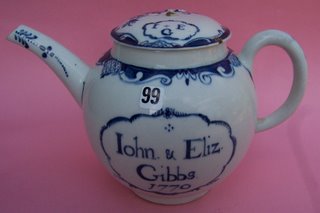 Gaff of the day was made by me. I greeted a couple, gave them a catalogue and said I’d put them on the mailing list. “Mr & Mrs —-” – I paused. He looked startled. “Oh, ah, no” he said “This is my daughter.” Well, he was considerably more flattered by the mistake than she was.

It was a family affair, which gives us all huge pleasure. Both sons and Dilly came along after work and El and her husband took the afternoon off work and came from London. Our cousin also came along after work to take the money at the end – I don’t do money, I can add up but I can’t count notes under stressful conditions, especially after 8 hours on my feet, smiling constantly. I’m all smiled out today. We know most of the customers; we’ve been holding these specialist sales for over 20 years and some people have come to every one. Others have had their interest kindled by us. If someone comes in and says “I’m interested, but I don’t know anything about it and I don’t know what I like yet” then I’ll offer to bring them everything, a couple of pieces at a time, so that they can learn the characteristics of the china and what type of things they are drawn too. They can make notes of the pieces they like and then I’ll bring those to them again. We give a pretty accurate guide price (unless there are keen bidders who drive the prices up) which takes into account any damage or repairs done, so that they know roughly how much they will have to spend. It’s a pleasure, a year or two later, to see how those people have grown in knowledge and enthusiasm – and sometimes they have developed rather expensive tastes, which is, well, it’s good for business.

The sale itself was excellent. Prices were buoyant (though nothing sells itself; the Sage has been an auctioneer for a very long time and knows what he’s doing) and the last lot, a darling little inscribed teapot, had so many people after it, including two telephone bidders, that the price went up by £1,000 in between me saying to my phone bidder ‘do you want to bid again?’ and him saying ‘yes’. He got it though in the end. The knop on top of the lid, which has been broken off a long time ago, would have been shaped like a little open flower. The pot itself is completely undamaged and it fetched £8,800. It was particularly valuable because it was inscribed both with names and a date.

An auction is great. Addictive though EBay is, there’s nothing quite like being there, handling the pieces, seeing how the bidding is going, watching people’s faces and hoping for them to look down or shake their heads (if you’re bidding), or keep their eyes on the auctioneer and nod (if you are selling). Having a personal interest in the outcome turns it from an interesting, but not personally engaging, affair into an exciting strategic wrangle and of course to be the auctioneer is the best job of all, albeit the most stressful.

I rarely buy, myself. We’ve got too much stuff already and I’m not a collector; we have one in the family and that is plenty. But I love it when I do; I am a determined bidder and think (yeah, okay, I delude myself) that, if I am quick and decisive, I will intimidate my more hesitant opponents. I wave my catalogue or numbered paddle to attract the auctioneer’s attention and then nod firmly the moment he has taken another bid. Then, when I win, I beam happily at him – or her – and show my paddle again for the number to be taken.

So, today, not much work. I will probably put together the price list for the website and, if I get around to it, write a sale report. But the family is all together for the first time in a month, so I won’t spend all day on the computer.