And now the cake – you know, the Cake – is in the oven.  Pudding will be done by the weekend, I daresay.  This is horribly disconcerting, I seem to have reverted back to the Z of at least ten years ago, with all this baking and preserving.

I don’t remember an autumn when I’ve been so consistently busy with school stuff.  I’ve had to take weekends off recently, I couldn’t have coped otherwise, except last weekend I worried, even if I kept away from the keyboard.  I can’t see an end in prospect either, but I’m determined to get away to see Wink next month because she doesn’t feel able to spend several hours in a car until she’s had her hip done and has recovered.  She’d rather hoped to have had a date by now, but not yet – so I’m going down next weekend anyway.  I’ll be driving down on Thursday – that is, tomorrow week – and I’ll be in no hurry, so available to drop in on anyone on the way, and also free in the Wiltshire area on Friday, if anybody is about and would like to be dropped in on?  We’re likely to be visiting Dodo in Weymouth on Saturday – Wink’s godmother, she’s now 101 years old and still lives by herself in her own house.  I last saw her on the 100th birthday last September, I’ve known her all my life.  In fact, she was my mother’s oldest friend, whom she met in 1941.  I’m sure I put up a picture last year, but here is one again. 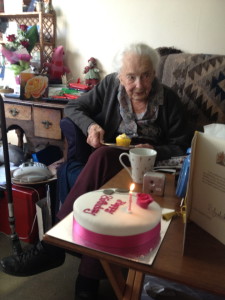 All these preserves had to be found a home, and I knew where there was room but I didn’t intend to put them.  There are cupboards in the larder that are frankly useless.  I shall explain.

Back in the day, over 20 years ago, we had a good big larder, about 8 feet square I should think, though I’ve never measured it.  But then we had an extension built on the house and part of the larder was in the way.  That seemed ok, didn’t really need that big a room, so it was halved in size and the cupboards and shelves put back along the long wall.  But the cupboard doors are surprisingly small, you can’t see what’s in there easily.  And bending down was awkward, there wasn’t much room.  And so what got put in there tended to be forgotten, especially when we started stacking things on the floor.  And so it was that I found, one year, several jars of blackberry jelly that had languished there until they were dry and dusty, and so since then they’ve mostly been unused.

So I’m going to get rid of them.  It’ll be a fair bit of trouble because the shelf above is full of stuff, but they’ve got to go.  They will be replaced by open shelves and I’ll have room for my second fridge there too, which is presently in the annexe, though it usually is slightly in the way in the kitchen.  Stuff we dump on the floor can go on the lower shelves and it’ll all be much better.

The Cake is cooking overnight in the slow oven.  It’s supposed to take 10-12 hours, but I’m a bit anxious.  I won’t be surprised if i pop down a couple of times in the night to fuss over it, and then oversleep.  But we’re having Rupert tomorrow I think, so I mustn’t be up late.

4 comments on “Z the Housewife”