Well, this has been a good day.  And I will tell you why.

First, I’ve sowed quite a number of seeds in the greenhouse, which is always a time of great pleasure for me.  I’ve got a few still to do, but have sown three varieties of tomato, five of pepper, both sweet and hot, spinach, Swiss chard, broad beans, sweet peas, a mixture of seeds (clover, plantain and vetch) for the tots and lamb’s lettuce for them too – oh, and something else, but I can’t remember at the moment.  Since it’s so warm, I haven’t used the soil-warming cable but have brought the peppers and tomatoes into the house to germinate.

The post came, bringing a couple of books I’d ordered.  I don’t think I’ve mentioned that Sir Bruin and I talked about The Hunger Games on Facebook.  He offered to lend me the film and Caitlin (in Australia) suggested reading the books first, so I ordered the first, along with one of Donna Leon’s Brunetti books.  They arrived today.  After lunch, I settled down and read the first 50 pages of THG, by which time Sir B himself, along with the lovely Small Bear had arrived in our very driveway!  They are having a weekend away in their new Hodmedod (otherwise knows as a caravan) and decided to spend it in Yagnub its very self.

After hot liquid refreshments, we toddled upstairs to inspect Edweena and the Tots and they were duly admired and held.  As we chatted afterwards, Edweena was making her usual valiant efforts to scale her run and escape.  “Does she ever fall over backwards,?” enquired Sir B.  I said that I’d not known it happen yet.  And then it did, of course,  Ed almost got her claw over the top and fell over on her back.  I should have left her to see if she could right herself, I suppose, but I couldn’t help but rescue her and turn her the right way up.  She wandered off, looking a bit shocked.

A while later, the Bears left to explore the fleshpots of Yagnub and I saw a splendid dandelion flower in the grass.  I thought it was just the thing to cheer up poor Edweena and picked it.  Well, was I right?  That’s a statement, darlings, not really a question, meaning I was indeed right.  And here’s the proof.  Videos have been put on Facebook, but I haven’t quite mastered doing that here – it’s simple in theory, but they use too much memory and I need to consult Ronan. 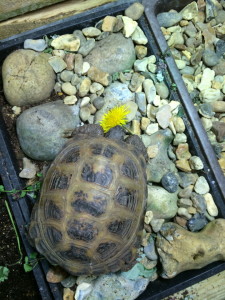 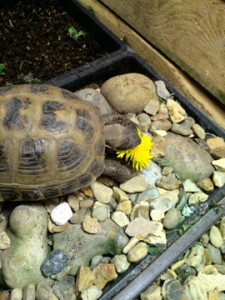 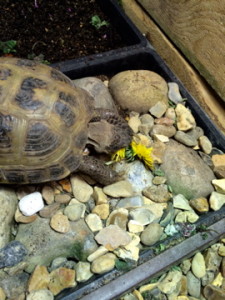 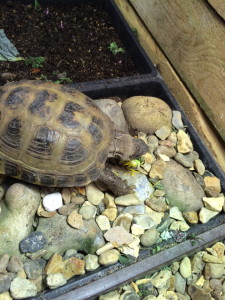 It turned out that the Bears were staying at a caravan site belonging to a friend of ours, so they said they’d mention the connection before they left. And once they left here, I started reading again. I was already gripped with the first 50 pages and whipped through the remaining (nearly) 400 pages by 8.30 this evening, with time out for cooking and eating dinner. I’ve ordered the rest in the trilogy. I’ve not read the post-apocalyptic sci-fi sort of thing for years but it just hit the spot today. Apologies to those of you who, quite rightly, think I should have gone to a proper book shop, but there isn’t one locally any more and I won’t get to Norwich for a while. I should go on Tuesday, when there’s a Nadfas lecture, but there’s also a Finance committee meeting and that will have to take priority.  So t’internets it is.