I’m not sure why, but it’s much easier to add photos from my iPad than from the computer.  I’d ask Ronan, but he’d probably blame the iMac.  No matter, if necessary I’ll just transfer pictures from computer to pad and go from there, as I just did with my new ‘unobservant eye’ photo.  Which I also worked out how to put on to the sidebar – ok, that wasn’t so difficult.

Anyway, today was rather more eventful than we had expected.  Al & co were off to the Sea Life Centre in Yarmouth as Pugsley’s chosen birthday treat, so they called in here on their way.  When he’d unwrapped his saw, hammer and so on, I explained the carpentry story (that sounds a bit New Testament, but you know what I mean – or if you don’t, you didn’t read yesterday’s post) and everyone looked pleased.  Except Hay, because it went rather over his head, but it was all right because he liked the carved stone elephants I’d brought back from Turkey (why elephants?  Because they were there.  Does it matter?) so he had that to be pleased about.  Pugsley liked them too.  Very cleverly, the Sage* had found up the original set of soldiers that Al had made for Ro, so they were displayed too.

After they left, we got ready to leave for Old Buckenham airfield, where they were holding a tribute day to Ken Wallis, who died recently at the age of 97.  I’ve written about him before: he is best known as the inventor of the autogyro, most famously used in You Only Live Twice, the James Bond film.  Ken himself was the stunt pilot in the Little Nellie scenes.  Little Nellie was named after him of course – Nellie Wallace, the music hall star.

We were over half way there when Miriam sent me a text and, paused at a junction, I read it – fortunately.  The cows were out.  Oh bum.  I replied that we’d get back asap and turned round and drove back.  Big Pinkie looked smug.  The other two looked sedately excited – if you think that’s an oxymoron, that’s the only sort of excitement I do myself at my age.  They all strolled peacefully on to the Ups and Downs, I gave Miriam my keys because she wanted to take Ben for a run later, and we set off again.

Darlings, it was a brilliant day.  We never considered calling it off after our unscheduled return, but I’m so glad of that.  There were lots of vintage and classic cars and motorbikes on show, particularly English ones.  One easily forgets how many fine English vehicle manufacturers there used to be.  There were autogyros on display too, very splendid ones, aeronautical (and aerobatic) displays and Little Nellie herself was there. 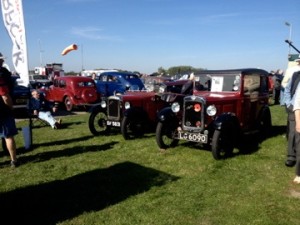 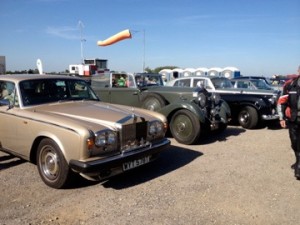 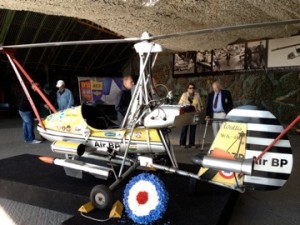 Apparently, they had expected a mere 500 people, but there were a lot more than that there and it was a happy tribute to a brilliant, enthusiastic man.
Later, at home, I was busy in the kitchen when Russell appeared looking anxious.  Edweena the tortoise was nowhere to be found.  She is feeling the cold and caused minor alarm a few days ago, when she burrowed out of sight.  Since then, she had gone deeper, but was still visible.  R had scrabbled about, but couldn’t find her.  He was afraid she had been stolen.  Well, I said, it wasn’t impossible, but it was pretty unlikely.  Hardly anyone knows where she is, she isn’t visible anyway.  We explored with a trowel.  Then I started digging with a fork, starting some way from where she could possibly have dug to.  And suddenly, there she was, dug up like a large stone.
She is now in a shoebox inside a large crate inside the coolest bedroom.  I’m rather concerned, however, because it’s a bit early for her to hibernate – that is, it’s a long time before spring.  I’ve issued advice for while I’m away – even in Ronan’s bedroom, it’s warmer than outside, she may be wakeful for a bit longer.  And I don’t think she should sleep long past the New Year, we need to get a heat lamp and keep her inside, I think, until we really know what we’re doing.  I like animals with facial expressions, that follow you about and make it clear what there requirements are.  I’m not really suited to be a tortoise mummy.

*You may have noticed, my husband is usually called Russell nowadays. His sagacity has lapsed severely of late, but credit where it’s due.